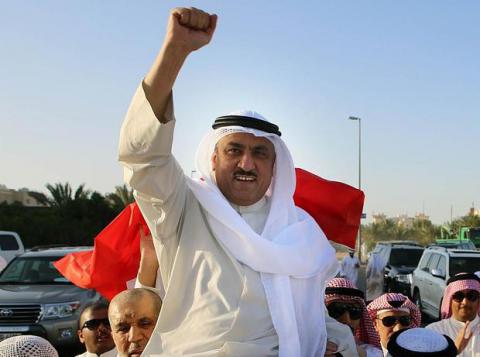 On 21 April 2017, Alkarama received confirmation that prominent Kuwaiti human rights defender and former parliamentarian Musallam Al Barrak, was released from prison after having served his full two- year sentence. Al Barrak is a known opposition parliamentarian, who has marked the political life in Kuwait by actively and courageously speaking up against human rights violations and government corruption. In February 2015, he was convicted for “insulting the Emir”.

Al Barrak was first arrested in October 2012 following a speech in which he criticised the arbitrariness of the authorities’ policies, as well as restrictions to political and civil rights of Kuwaiti citizens. On 15 April 2013, he was first sentenced to five years in prison by the Court of First Instance. Al Barrak appealed the decision before the Appeal Court, which issued its decision in April 2014 reducing the sentence to two years of imprisonment. The Kuwaiti Court of Cassation eventually upheld the decision of the Court of Appeal in May 2015.

Upon his release, Al Barrak called on the Kuwaiti government to initiate talks in order to successfully achieve a form of compromise in the Gulf State, which has suffered bitter political disputes in the past decade. “If the government makes a serious step towards political reforms, we are ready to make many steps,” he said, while simultaneously assuring that no one in the opposition was trying to overthrow the ruling Al Sabah family. Al Barrak believes that in order for reconciliation to succeed, the government must reinstate revoked citizenships of opposition figures and scrap all freedom-curbing legislation issued in the past few years.

On 30 June 2015, Alkarama solicited the Special Rapporteur on the promotion and protection of the right to freedom of opinion and expression’s (SRFDX) urgent intervention on the case of Al Barrak. Moreover, on 11 March 2016, Alkarama requested the UN Working Group on Arbitrary Detention (WGAD) to issue an Opinion as to the arbitrary nature of Al Barrak’s detention.

“While we welcome the release of Musallam Al Barrak, we urge the Kuwaiti authorities to refrain from any further judicial harassment against him for peacefully making use of his fundamental right to freedom of expression,” says Alkarama’s Regional legal Officer for the Gulf, Julia Legner. “Furthermore, we call on the authorities to decriminalise defamation such as “insult to the Emir or other state authorities, and to repeal or revise laws containing provisions restricting the right to freedom of opinion and expression.”