IRAQ: Alkarama submits its report to the Human Rights Committee in the context of its next review 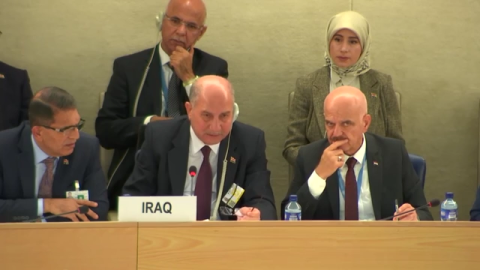 On 31 January 2022, Alkarama submitted its shadow report to the UN Human Rights Committee as part of the 6th review of Iraq during the 134th session scheduled for 28 February to 25 March 2022.

Composed of 18 independent experts, the Human Rights Committee monitors the implementation of the International Covenant on Civil and Political Rights (ICCPR), ratified by Iraq in 1971, through periodic reviews.

In this context, Alkarama drew the Committee's attention to the serious human rights violation in the country, expressed its main concerns and made recommendations.

Violations of the right to life

Alkarama's report denounces the death sentences handed down after unfair and flawed trials, often, on the basis of the 2005 anti-terrorism law. These death sentences are regularly followed by mass executions, which continue to date and are unanimously denounced by NGOs, human rights defenders and UN experts. Iraq ranks 4th in the world in terms of the number of executions. Alkarama's report also highlights the numerous extrajudicial executions of civilians committed by the Iraqi army and government militias in the context of the fight against the Islamic State.

Despite Iraq's ratification of the Convention Against Torture, gaps in national legislation regarding the definition and criminalization of the crime of torture create a breeding ground for the practice. The admission as evidence of extracted confessions by a failing judicial system or the general climate of impunity also encourage the use of these practices.

From arbitrary arrests to enforced disappearances

Alkarama's report also underlined the numerous arbitrary arrests followed by incommunicado detentions and often amounting to enforced disappearances. Despite numerous recalls from the UN Committee on Enforced or Involuntary Disappearances, Iraq regularly violates its obligations by refusing to cooperate with this mechanism. While tens of thousands of families are still awaiting news about their missing persons, Iraq remains the country with the highest number of missing persons in the world.

Violations of the right to freedom of opinion, expression and association

In recent years, Alkarama has observed with concern the persistence of the Iraqi authorities in using the Anti-Terrorism Law to suppress peaceful criticism of the government. The October 2019 anti-government protests that brought together hundreds of thousands of people in various Iraqi cities including the capital, Baghdad, or Basra (south-eastern Iraq), to denounce the corruption of the leadership, demand jobs and better public services; are a particularly illustrative example of this repression. Many activists and journalists, known for their dissent, have been killed or injured by government-backed militias and security forces who proceeded to numerous arrests, including young minors’.

Alkarama hopes that the concerns raised in its alternative report will be constructively addressed during the dialogue between the Human Rights Committee and representatives of the State Party in order to put an end to all these violations.