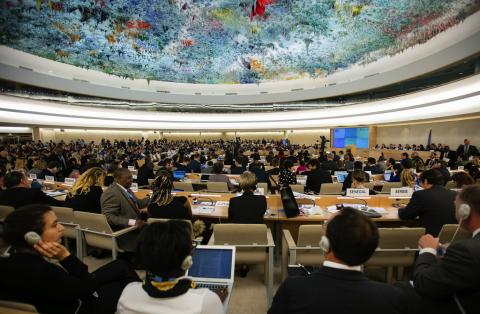 Following its January review, Israel was invited to examine 240 recommendations and to report back on whether it intended to “accept” or “note” the recommendations no later than the 38th session of the HRC, which began on June 18. Israel chose to adopt 93 recommendations either in whole or in part, a low rate of only 39 per cent acceptance.

Additionally, despite stating in its report to the HRC that “[t]he State of Israel remains committed to the Universal Periodic Review (UPR),” and supporting a recommendation to strengthen its participation with the UPR mechanism, Israel in fact boycotted the adoption of its UPR outcome on June 29.

In response to the HRC’s adoption of Israel’s UPR outcome, Inès Osman, Alkarama’s Legal Officer for the Mashreq, stated: “While, for a long time, Israel has shown a lack of respect for its international obligations and an unwillingness to cooperate with the UN mechanisms, its refusal to fully participate with the UPR process is particularly discouraging. The UPR is a process to which all states are subject, and thus Israel’s lack of cooperation, as well as its decision to support a number of weak and contradictory recommendations, makes it clear that Israel sees itself as above the law and beyond international scrutiny.”

International human rights instruments and cooperation with the UN

Ahead of Israel’s review, Alkarama submitted a shadow report to the HRC, in which it raised, among other issues, Israel’s international obligations and lack of cooperation with international human rights mechanisms.

Of the 22 recommendations made by Member States for Israel to ratify a number of international human rights instruments and to respect its international obligations, Israel supported just three, and even then only in part, all of which asked Israel to remove reservations to articles of the Convention on the Elimination of All Forms of Discrimination against Women (CEDAW).

In addition, Israel merely noted a series of recommendations to invite or accept the visit requests of the UN Special Procedures. Eight requests from the Special Procedures to visit Israel are currently pending, including a request by the Special Rapporteur on extrajudicial, summary or arbitrary executions to visit Israel and Palestine, which has been indefinitely postponed by Israel.

Eleven requests were made to Israel concerning the establishment of a National Human Rights Institution (NHRI) in line with the Paris Principles. Israel noted the nine recommendations which encouraged it to “establish” such an institution, and supported those which merely asked that it “consider establishing” or “enhance efforts to establish” an NHRI in compliance with the Paris Principles, raising doubts as to the state’s real commitment to reach this end.

Excessive use of force

Israel supported two recommendations related to the excessive use of force, a practice it has been repeatedly criticised for by the UN. Most recently, on June 11, the UN General Assembly passed a resolution condemning Israel’s use of excessive force against Palestinian civilians in the Gaza Strip. The recommendations – put forward by Madagascar and Spain – called for the Israeli authorities to ensure that excessive force is prevented and punished both in law and in practice.

Arbitrary detention: the practice of administrative detention and military trials of children

Despite the state’s commitment during its last UPR to ensure that administrative detention complies with human rights standards, this practice has continued unabated, and was raised again by a number of states during the UPR.

Israel accepted a series of recommendations to ensure that its use of administrative detention conforms to international standards, including by ensuring that it is only used in exceptional circumstances.  However, the state only partially accepted recommendations made by Germany, Sweden, and Finland that emphasised Israel’s responsibility to refrain from holding minors in administrative detention. Israel further chose not to support Venezuela’s recommendation that it “[e]nd the illegal detention of Palestinians without charge or legal proceedings”, neither did it support Germany’s recommendation to end the practice of collective punishment.

Israel’s lack of full support for the recommendations related to administrative and otherwise illegal detention is especially concerning considering that as of May 2018, 440 Palestinians – including three minors – were administratively detained in Israeli prisons.

In its shadow report, Alkarama raised a number of other concerns relating to Israel’s severe lack of respect for children’s rights, including the fact that children as young as 12 are brought before military courts, where they face penalties of up to 20 years’ imprisonment on charges such as “stone-throwing”. During its last UPR, recommendations relating to the trial of Palestinian children before military courts were disregarded by Israel, and again, the state chose not to support the Maldives’ recommendation to “[s]trengthen protections for Palestinian children by halting military proceedings against them”.

Israel rejected recommendations calling for it to put an end to torture during its last UPR, and Alkarama has continued to document cases in which individuals were held incommunicado and subjected to further acts of torture in order to extract confessions. Additionally, Alkarama documented several cases in which excessive force was used by the Israeli security forces during the arrests of Palestinians, including minors.

In its report, Israel supported a recommendation to ensure that the bill currently being drafted to criminalise torture conformed to article 1 of the UN Convention against Torture (UNCAT). However, it did not support a recommendation to fully translate the UNCAT into its national legislation.

Israel supported ten recommendations relating to the protection of human rights defenders and the promotion of a strong civil society in the country. Among these recommendations were requests for Israel to “[e]nsure free functioning of human rights organisations”; “[t]ake the necessary measures to guarantee the work of international human rights defenders”; “[e]nsure that civil society organizations are able to carry out their work in a secure and free environment”; and “[g]uarantee freedom of speech and association”.

Israel’s commitment to implementing these recommendations comes at a time when civil society space in the country is shrinking and the restrictions placed on human rights defenders are growing, a recent example being the judicial harassment of Human Rights Watch’s Israel and Palestine director, Omar Shakir.

Rejection of recommendations submitted by or concerning Palestine

Israel chose not to support eight recommendations based on the mere fact that they were put forward by the State of Palestine, saying that it welcomes an open dialogue with the Palestinian Authority (PA), but believes that Palestine “does not satisfy the criteria for statehood under international law”, and that, like “many other States”, it opposes “the designation of the Palestinian entity as a State.” As of January 2017, 70.5% of UN member states recognise the State of Palestine.

Regardless of the terminology used, Israel refrained from supporting 87 out of the 101 recommendations directly related to human rights in Palestine. Among the recommendations Israel chose not to support are to “take measures in order to abide by international law” in Palestine; “[e]liminate laws and practices that discriminate against Palestinians in Israel and in the occupied territories”; “[p]ut an end to the extrajudicial executions of Palestinians”; “[d]iscontinue the collective punishment of Palestinians”; “[r]everse policies and practices that negatively affect the enjoyment of human rights by Palestinians both in Israel and in the OPT”; and “[l]ift the excessive blockade on the Gaza Strip”.

UPRs take place every four years, and thus Israel’s next review is scheduled to take place in 2022. The state has until then to fully implement all accepted recommendations.