Israel: Cruel and Discriminatory Treatment of 12 and 15-year-old Palestinians 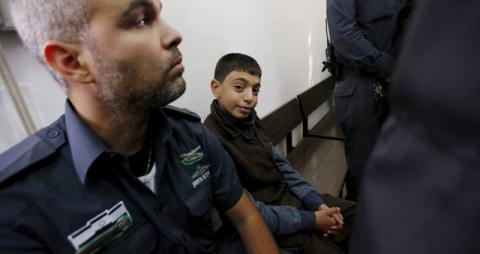 UPDATE: Shadi Farrah was released on November 30, 2018 following the completion of a two-year prison sentence

Two teenagers, Muawiya Alqam and Shadi Farrah, as young as 15 and 13 years old, are currently amongst the hundreds of Palestinian children detained in Israeli prisons. Both violently arrested and deprived of their basic fair trial rights, a discriminatory treatment applied to Palestinians only, they are now facing prosecution before the Israeli Central Criminal Court for "possessing knives."

Concerned over these facts, examples of a general pattern, Alkarama sent on 30 June 2016 an urgent appeal to the United Nations Special Rapporteur on the situation of human rights in the Palestinian territories occupied since 1967 (SR OPT), asking him to call upon the Israeli authorities to ensure that Palestinian children are treated humanely and that their fair trial guarantees are fully respected.

Muawiya, a 15-year-old from Beit Hanina, East Jerusalem, was arrested during a stabbing episode against a Yasam officer – the Israel Police Special Patrol Unit officers – along with his cousin Ali, in Pisgat Ze'ev, a Jewish neighbourhood in East Jerusalem. Dragged into a police van, he was stripped naked, threatened to be killed and had cold water poured on his body before being taken to Moscovia detention centre in West Jerusalem. He was subsequently transferred to Hasharon and finally to Megiddo prison, where he remains detained until today. He was detained incommunicado, not being allowed to contact his family and his lawyer for one month.

On 18 November 2015, the Israeli Central Court charged him with "attempted murder" and "possession of a knife," for which he risks to be sentenced to six and a half years of imprisonment. The Court adjourned his trial more than 15 times, the next hearing being scheduled for 17 July 2016.

Shadi, on his turn, is a 13-year-old boy from Semiramis, a Palestinian neighbourhood in East Jerusalem, and was arrested on 30 December 2015 while waiting for the bus to go home after school, after some Israeli settlers heard him speaking Arabic and called the Yasam.

After being immobilised with a taser, he was beaten, stripped naked and threatened while being taken to Moscovia detention centre where he was beaten again, interrogated and forced to confess he had a knife with him. He could see his lawyer only after his coerced confession. He was then transferred to Al Marsa juvenile detention centre where he reports he is harassed by older inmates.

Like in Muawiya's case, the Israeli Central Court charged Shadi with "possessing a knife" on 3 January 2016; after more than 15 hearings, his trial was postponed to 7 September 2016. Shadi's lawyer recently obtained a video showing that he did not have any knife with him while arrested.

Muawiya and Shadi's cases illustrate the institutionalised Israeli policy targeting Palestinian children through imprisonment, as previously denounced by Alkarama in the cases of Amer Bajawi, Mohammed Suleiman and Dima Al-Wawi. "Violently mistreated during the arrest, Palestinian children are systematically interrogated without the presence of their lawyer or their parents, detained incommunicado and charged for crimes carrying heavy sentences, violating their most fundamental human rights as children. On the contrary, non-Arab Israeli nationals always see their human rights respected, whatever the crime they may be accused of," comments Inès Osman, Alkarama's Legal Coordinator. "Israel must immediately put an end to this worrying pattern of violations and ensure that Arab Israelis and Palestinian minors deprived of liberty are afforded all the fundamental guarantees they are entitled to, as recommended in the last review of Israel by the Committee against Torture on 13 May 2016."