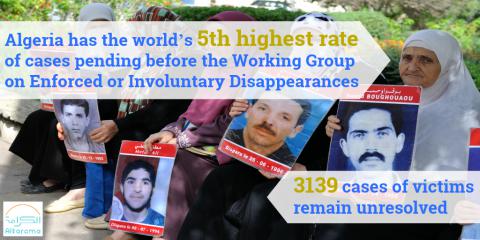 In preparation for the 2018 periodic review of Algeria by the Human Rights Committee (HRC), Alkarama submitted its contribution to the committee’s List of Issues on July 24, 2017.

The list, prepared by the committee’s experts, is set to be published at the end of the HRC’s 121st session in autumn 2017. In order to facilitate the examination, the Algerian authorities will be required to clarify the issues raised by the experts. Algeria’s last examination by the committee was held ten years ago, as Algeria failed to submit its national report, due since 2011, until 2017. In its report, Alkarama raised 51 issues relating to various topics including the disappeared, the lack of cooperation with the committee, and the exceptional legal framework used to suppress any dissents.

In its report, Alkarama recalled that Algeria has the world’s fifth highest rate of enforced or involuntary disappearances pending before the Working Group on Enforced or Involuntary Disappearances (WGEID). The visit requested by UN experts since 2000 has never materialised, and 3139 cases of victims remain unresolved as a result of the authorities' refusal to cooperate.

Alkarama raised numerous questions relating to how unresolved cases of the disappeared during the civil war have been handled, calling into question the 2006 Charter for Peace and National Reconciliation. The HRC had already called for the amendment of the charter as it violates several provisions of the International Covenant on Civil and Political Rights (ICCPR).

The charter not only creates a climate of impunity by establishing a general amnesty for state agents responsible for grave violations of humanitarian law and human rights, but also makes it impossible for the victims’ families to seek legal redress, in violation of Article 2§3 of the ICCPR, which guarantees the right to an effective remedy.

Anyone who denounces violations committed by state agents is punishable by three to five years' imprisonment, in violation of article 19 of the covenant, which protects the right to freedom of expression.

Although the committee has adopted numerous decisions concerning individual complaints against serious violations of the covenant, the Algerian authorities refuse to take the necessary measures to implement these decisions.

On the contrary, in violation of their obligation to protect and support victims and witnesses of human rights violations, Algeria has in fact retaliated against certain complainants. Rafik Belamrania is currently detained in Jijel prison for "apologizing for terrorism" for  after bringing his father’s case before the HRC.  Belamrania’s fatherwas tortured and then summarily executed by the army.

An exceptional legal framework used to silence any dissenting voices

In its report, Alkarama raised its concerns over the legal loopholes used in the fight against terrorism, including the vague definition of terrorism in article 87 bis, amended in 2014.

The definition allows authorities to criminalise acts involving freedom of opinion, expression and peaceful assembly, and associates "subversive" acts with "terrorist" acts. Through this definition, several bloggers and social media activists have been prosecuted for terrorism.

Moreover, anyone who "deliberately offends the incumbent head of state" shall be liable to a term of imprisonment between one month and one year. Such is the case of Hassan Bouras, a leading member of the Algerian League for the Defense of Human Rights (LADDH), who was sentenced to one year imprisonment in November 2016 for "insulting an official state body.” Bouras was known for his criticism of the government and his exposure of corruption in Algeria.

Finally, freedoms of association and peaceful assembly are systematically infringed by the Algerian authorities. Any demonstration must be authorised by the administration, and gatherings in the capital -including those by the mothers of the disappeared- have been prohibited since 2011 and continue to be violently repressed.

Similarly, the executive holds a discretionary power over whether to accept or refuse the registration of associations on the grounds of being contrary to "national and constant values, public order, morality and the provisions of the laws in force.”