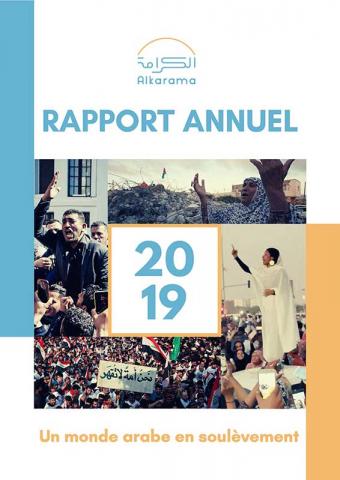 Alkarama launched today its annual report on the situation of human rights in the Arab region for the year 2019. The report covers 20 countries and is available in three languages, Arabic, English and French.
Alkarama’s Legal Director Rachid Mesli said the report is “an account of Alkarama’s efforts over a year, in terms of the legal work on individual cases and complaints submitted to the special procedures, treaty bodies or in parallel shadow reports. It also highlights Alkarama’s concerns about the situation of human rights in country separately.”
The annual report represents also a confirmation of Alkarama's commitment to its mission to fight injustice in the Arab world and to embody its goals in defending human rights, especially the right to life and to physical and moral integrity, and the right to freedom of opinion and expression.
In turn, Alkarama’s Board clarified in its introduction to the report, "The importance of this endeavor of Alkarama lies not only in preserving the memory of the nation and future generations, but it has become the only solution to help the victims of these violations, and even sometimes save them by resorting to the mechanisms of international human rights law”.
It is worth noting that that Arab societies, despite repression and intimidation, witnessed during the past decade a real qualitative shift that promises structural and lasting transformations, where the work of Alkarama and other human rights oganisations has opened new horizons for the local civil society, whose voice has risen high in several forums, including international human rights bodies of the United Nations.
Alkarama realizes how “disturbing” its work has been to the foundations of systems aiming at protecting the interests of authoritarian regimes supported by foreign allies and that do not care about the misery and suffering of their people. Alkarama fully realizes that this endeavor has consequences for both its work and its staff. However, what Alkarama has incurred while fulfilling its mission remains worthwhile compared to what has been achieved. The idea has arisen that the tyranny of these political systems based on violence and fear is not an inevitable destiny for the peoples of the Arab region, and that a free voice can contribute to eliminating the injustice they suffer from.
The report of Alkarama is available here :
English
Arabic
French