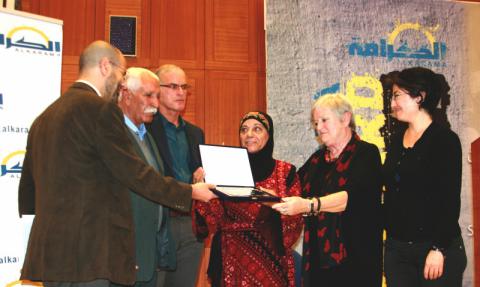 On 11 December 2014, the Alkarama Foundation presented its 6th annual Award for Human Rights Defenders in the Arab world to Palestinian human rights lawyer and activist, Shireen Issawi, in recognition of her courage and bravery in defending Palestinian prisoners and advocating for their rights. The ceremony held at the Ecumenical Centre in Geneva focused on the Palestinian people's strategy of non-violent resistance, a story largely under-reported in the mainstream media.

Speaking at the event were UN and international law experts, Richard Falk, Norman Finkelstein and Alfred de Zayas, as well as Palestinian Member of the Knesset, Haneen Zoabi, and Swiss political personalities, Ruth-Gaby Vermot-Mangold and Guy Mettan. In the absence of Shireen, arrested by the Israeli authorities on 6 March 2014 as part of a crackdown on lawyers defending Palestinian prisoners, the Award was presented to her parents, Layla and Tarek Issawi.

Opening the ceremony, Rachid Mesli, Alkarama's Legal Director said: "Thousands of Palestinians are arbitrarily detained by simple administrative decision, including numerous children. [...] It is for denouncing these violations and having dedicated her life to justice and freedom for the Palestinian people that Shireen Issawi also finds herself in jail today, accused – like too many Arab activists in their respective countries – of supporting terrorism or terrorist organisations."

"Shireen Issawi's nonviolent resistance forms a link in the chain of a long, honourable tradition. It includes not only names familiar to all of us, such as Gandhi and Martin Luther King, but also, and more significantly, the nameless Palestinians who waged a heroic mass nonviolent struggle against the Israeli occupation during the first intifada, that began 27 years ago, on 9 December 1987," said expert of the Israel-Palestinian conflict, Norman Finkelstein. "Shireen Issawi's unbendable will in a righteous cause serves as a luminous example, not just for Palestinians, but also for everyone struggling to make the world a better place."

"Shireen Issawi is a brave, resolute and inspiring human rights defender who has dedicated her professional career as a lawyer to the long Palestinian national struggle for freedom and self-determination," added former UN Special Rapporteur on the Situation of Human Rights in the Palestinian territories occupied since 1967, Richard Falk. "By honouring Shireen Issawi we are expressing our commitment to nonviolence as the path to peace based on rights and justice, and on the equality of the two peoples. [...] As we honour her, we are also seeking to remind the world that it is past time to end the ordeal of injustice inflicted on the Palestinian people as a whole."

"Israel annexed the territory of East Jerusalem but not the Palestinians who were born and live there," explained Haneen Zoabi, recently banned from all parliamentary activity for six months for having suggested that the Palestinian resistance was a legitimate struggle. "One third of the city's residents are people without citizenship. They live in a country that views their territory as its own but does not view them as part of it."

"In 1989, after the fall of the Berlin wall, we said 'never again' walls that separate peoples. Now there are walls everywhere, walls that not only separate two peoples and two cultures, but also make the building of a lasting peace impossible," continued former member of the Swiss Parliament and the Council of Europe, Ruth-Gaby Vermot-Mangold. In a moving speech, she recalled the many instances where the international community had said "never more" such as after the Shoah, which had led to the adoption of an international human rights system – a system which no one should ever take for granted. "[In Switzerland] we are free; but it is from you [Shireen] that we learn how important it is to fight for the protection of human rights."

In a letter written from her solitary cell on 6 November and read by her mother, Layla Issawi at the Alkarama Award ceremony, Shireen stated: "Some believe that the Palestinian people are defeated because they live under the occupation. Their hypothesis is far from the truth. Those who defend their inalienable right to freedom and dignity are not defeated. On the contrary, however inhumane the occupation and its ability to arrest, kill and destroy are, these men must have the strength and courage to continue until they get their freedom." Thanking "all the free men around the world gathered around the just cause of the Palestinians," Shireen pleaded for "a world in which people can live free, with dignity and hope."

Speaking on behalf of his daughter, Tarek Issawi echoed his daughter's words: "We, in Palestine, defend the dignity of our people, despite the injustice imposed on us by the colonisation. We are certain that our struggle is just, and thank all the free people of this world for their continuous support."

Closing the ceremony, the UN Independent Expert on the Promotion of a democratic and international order, Alfred-Maurice de Zayas praised Shireen and her family's "courage and perseverance" and emphasized the essential right of the Palestinian people to self-determination: "All international law experts have recognised the right to self-determination, a binding right, enshrined in the UN Charter, in Article 1 of the International Covenant on Civil and Political Rights, and in Article 1 of the International Covenant on Economic, Social and Cultural Rights. The UN General Assembly has recognised the Palestinian people's right to self-determination and this repeatedly. Alas, for the past 67 years, you have suffered expulsion, occupation, humiliation and injustice. But you have kept your honour, your identity and your will to live. Men and women of good will wish you a free and independent State where you will finally be able to exercise your rights and join all the other nations of the world in international solidarity. I hope you get justice and peace in a near future. You deserve it."

The ceremony attracted over a hundred people at the Ecumenical Centre in Geneva and watched by a further 150 people on Alkarama's live webcast.

You can also watch the whole ceremony on the following link: http://youtu.be/wLKqde508L8

For photos, quotes or an interview with any of the speakers, please contact:
- Colombe Vergès, Media Coordinator on c.verges@alkarama.org / +41 79 129 79 15