Yemen: Saudi-led Coalition Strikes Children on Their Way to School 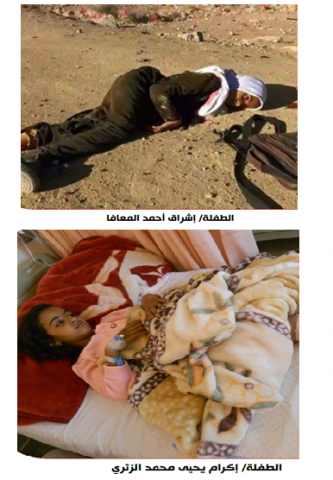 On the morning of 10 January 2017, as children were making their way to the Al Fallah Model School in the town of Bani Mesar in the Nihm District of Sana’a Governorate, the Saudi-led coalition striked the town, killing a school teacher and two students. Concerned with the ever growing reports of indiscriminate airstrikes targeting civilians conducted by the Saudi-led coalition in Yemen, on 25 January 2017, Alkarama and the Legal Center for Rights and Development (LCRD) addressed a communication to the UN Special Rapporteur on extrajudicial, arbitrary and summary executions (SRSUMX), Dr Agnes Callamard, calling for the condemnation of the coalition’s violations of international humanitarian and human rights law.

On 10 January 2017 at 8 am, an airstrike hit close to the school, just as Ali Mothfir was calling his students in for class. He was killed along with Ishraq Al Maafa, a 14-year-old female student and Shamekh Saasou’u, a 17-year-old male student. Four other children between the ages of 8 and 14 were injured and three other civilians, possibly students, were reportedly killed.

Since 2015, Yemen has been engulfed in civil war and in March 2015, the country became the stage of airstrikes conducted by the Saudi-led coalition composed of the United Arab Emirates, Kuwait, Qatar, Bahrain, Egypt, Morocco, Jordan and Sudan. Moreover, the coalition receives the logistical support of the United States who is also engaged in drone strikes against the Al Qaeda chapter in Yemen (AQAP) since 2002. In 2016, in his report to the UN Security Council on Children and Armed Conflict, the UN Secretary General (UNSG) listed the Saudi-led coalition as a party to the Yemeni conflict “that kills and maims children” and that engages in “attacks on schools and hospitals”. Indeed, the UNSG further specified that in 2015, the Saudi-led coalition was responsible for 60% of the children killed or maimed in Yemen.

The right to life is a universal right that cannot be compromised under any circumstances. Even in times of war and conflict, civilian life is to be protected as per common article 3 of the Geneva Conventions which put in place International Humanitarian Law regulating the conduct of war.

In its communication to the SRSUMX, Alkarama and the LCRD called on Dr Agnes Callamard to firmly condemn the indiscriminate attacks and the targeting of civilian areas, especially schools, by the Saudi-led coalition and to call upon the Saudi authorities to refrain from conducting any further strikes. Furthermore, the organisations called on the UN expert to publicly support the establishment of an International independent Commission of Inquiry to investigate war crimes committed in Yemen and call for the perpetrators of these crimes to be held accountable.