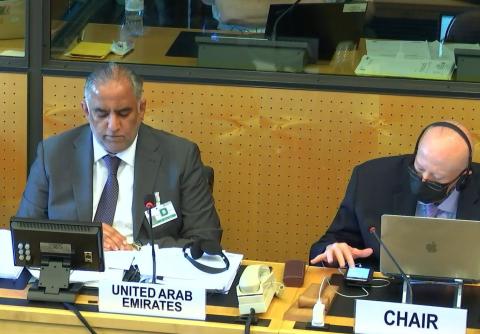 The UN Committee against Torture (CAT) has made several recommendations for the improvement of the human rights situation in the United Arab Emirates (UAE) following its initial review at the 74th session held in Geneva between 13 July and 14 July 2022. This is the State party’s first review by the CAT since the ratification of the Convention in 2012.

Composed of ten independent experts, the CAT monitors the implementation of the Convention against Torture and Other Cruel, Inhuman or Degrading Treatment or Punishment by States Parties through periodic reviews.

In this context, Alkarama submitted its alternative report and drew the Committee's attention to the seriousness of the human rights situation in the country, expressed its main concerns and made recommendations.

Definition and criminalization of torture

In its concluding observations, the CAT first noted the shortcomings of the UAE legislative system with regard to the prohibition of torture as expressed by Alkarama in its report. The Committee noted the lack of compliance between the definition of the prohibition in domestic law with the one in the Convention.

It was therefore recommended that the State party define and criminalize torture by establishing an absolute and non-derogable prohibition that takes into account the gravity of the crime of torture.

Although procedural safeguards are provided for in UAE law, they are in practice ignored by the country's authorities during all stages of the procedure, the Committee stated.

The latter recommended that the UAE ensure that all fundamental safeguards are respected from the outset of police custody and that each person in custody is able to benefit from the protections enshrined in the law.

The Anti-Terrorism Law and detention in "Munasaha" centres

Alkarama had also pointed the issues raised by the 2014 Counter-Terrorism Act which provides an extremely broad and imprecise non-exhaustive list of the notion of "terrorism" which considerably broadens its scope to include various acts or practices that do not meet the threshold of "most serious crimes" under international law.

In this regard, the experts called on the State party to "ensure that its counter-terrorism measures and legislation are in line with the prohibitions of the Convention against Torture and Ill-treatment".

In addition, Alkarama had indicated that Article 40 of the Anti-Terrorism Law provides that, by order of the prosecutor, the court may determine that a person who "appears to pose" a terrorist threat be sent to "Munasaha" centres (centres for "counselling" or moral rehabilitation).

Apart from the ambiguous wording of the article, it does not provide for any limitation on the duration of detention in such centers so that the person continues to be held there until the authorities consider that he or she no longer poses a threat.

The experts who expressed concern about the use of such centres "indefinitely extend the incarceration of convicted individuals considered to hold terrorist, extremist or deviant thoughts beyond the times provided for in their sentences (...)" stressed the need for detentions in such centres to be "based on clear and identifiable criteria established by law, that orders for such detentions are limited in duration, that maximum periods of detention in Munasaha centres are clearly defined by law, and that detainees have the ability to challenge the legality of their detention."

Allegations of torture and cooperation with UN mechanisms

The Committee also addressed the issue of ill-treatment with a particular focus on the situation of "human rights defenders and persons accused of offences against state security who, by virtue of the state security or terrorism charges against them, are subject to a legal regime with fewer and more restrictive procedural guarantees."

In its report to the Committee, Alkarama had reported several cases of defenders arrested under the pretext of terrorism and subjected to torture in order to extract confessions that were later used to condemn them. Among them, Mr Mohamad Ismat Mohamad Shaker Az and Mr Ahmad Ali Mekkaoui, whose cases were also included in the report of the United Nations Secretary General on Cooperation with the United Nations, its representatives and its mechanisms in the field of human rights.

The climate of impunity in the country is, in part, due to the lack of independence of the judiciary from the executive branch, expressed Alkarama pursuing that this results in the denial of judicial authorities of allegations of torture that are systematically rejected.

The experts therefore called for a review of the "regime for the appointment, promotion and dismissal of judges" in order to ensure their independence from the executive and added "that failure to investigate, criminally prosecute, or to allow civil proceedings related to allegations of acts of torture in a prompt manner, may constitute a de facto denial of redress and thus constitute a violation of its obligations under article 14 of the Convention.”

The admissibility of confessions extracted under torture

In its concluding observations, the Committee also expressed its preoccupation “over reports of convictions based solely on confessions obtained through torture.”

In its report, Alkarama raised the admissibility as evidence of confessions extracted under torture by the Emirati legal system, which places great importance on confessions even if they are the only evidence for the prosecution in trials, despite the allegations of torture made by the accused, including before judges.

The Committee thus recommended that the State party "take effective steps to ensure in practice that confessions obtained through torture or ill-treatment are ruled inadmissible and investigated".

As suggested by Alkarama, the Committee also asked to receive "information on all cases where confessions were deemed inadmissible on the grounds that they had been obtained under torture (...)".

In its report, Alkarama drew the attention of the experts to the violations committed in Yemen by the UAE, which has been leading, since 2015, with Saudi Arabia, a coalition formed with the aim of restoring the legitimate government of Yemen to power and fighting the militias of the "Ansar Allah" movement (also known as "Houthis").

The Committee thus reminded the State party that “the concept of ‘any territory under its jurisdiction’, linked as it is with the principle of non-derogability, includes any territory or facilities and must be applied to protect any person, citizen or non-citizen without discrimination subject to the de jure or de facto control of a State party”.