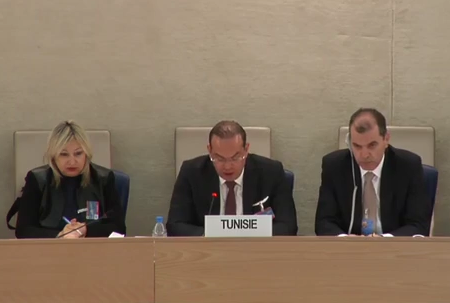 Unique mechanism of the Human Rights Council which aims to improve the human rights situation in each of the UN member states, the Universal Periodic Review will allow Tunisia to present the measures it has adopted to respect its international commitments.

On this occasion, Alkarama submitted, on 31 March 2022, its report in which it drew attention to the human rights situation in the country, expressed its main concerns and made recommendations.

Tunisia, examined for the 4th time

In its report, Alkarama expressed its fears about the consequences of the Tunisian political crisis on the human rights situation.

As a recall, on July 25, 2021, the Tunisian president, Kaïs Saïed, dismissed the head of government, suspended all activities of the Parliament and lifted the immunity of parliamentarians in violation of the Constitution. Also, in violation of the Constitution, he announced that he would assume the totality of executive, legislative, and judicial powers with the help of a head of government and ministers whom he would personally appoint.

This was followed by a series of restrictions on individual and collective freedoms, arrests and house arrests of deputies and senior officials, including magistrates and politicians. The number of dismissals by presidential order has increased and has continued since July 25, affecting many senior government and judicial officials.

Since July 25, 2021, numerous decisions that jeopardize human rights have been adopted.

The future of the transitional justice process, implemented in 2012 to address human rights violations committed under the former regime, has been put on hold.

The independence of the judiciary is also threatened by the unilateral decisions of the president, who imposes himself as the sole source of all powers and legislates by decree. Alkarama expressed its concerns about the President's decision to dissolve by decree the Supreme Council of the Magistracy (CSM), the independent body responsible for the appointment of magistrates.

In addition, Alkarama brought attention to the increased prosecution of civilians in military courts solely for publicly criticizing the president.

Finally, the extension of the state of emergency by the government has led to a restriction of civil liberties. Some draft laws, including the draft about freedom of association creates a real threat to fundamental freedoms.