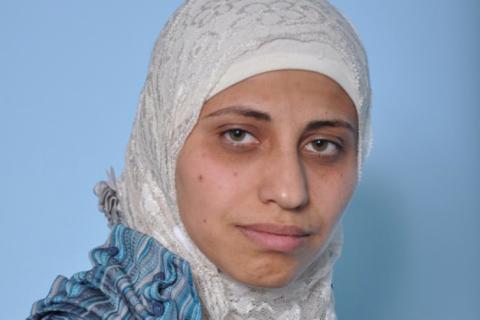 my poem morphs into a crime.

In the land of freedom,

the artist’s fate is prison.”

Extract from “A Poet Behind Bars” by Dareen Tatour, translated by Tariq al Haydar

In the early hours of the morning on October 11, 2015, officers of the Nazareth Police, escorted by a unit of Israel’s Border Police, raided the home of Palestinian poet Dareen Tatour, and arrested her without presenting a warrant nor providing any reasons for the arrest.

While in custody, she was forced to sign an investigation report that she was not allowed to read beforehand. In fact, Tatour was not informed of the charges against her until November 2, 2015, when she was indicted with “incitement to violence” and “support of a terrorist organisation” by the Magistrates’ Court in Nazareth. The two charges were based on her poetry, as well as her activity on social media.

A mistranslation submitted as evidence

The charges against Tatour equate the use of artistic expression calling for the fulfilment of the Palestinians’ right to self-determination with an act of terrorism, even though Tatour neither called for nor expressed support for any form of terrorism or violence against Israeli civilians.

Tatour has been under house arrest since her pre-trial detention ended on January 13, 2016. She is required to wear an electronic ankle bracelet, and remains deprived of access to the internet. On December 4, 2017, the Israeli court in Nazareth rejected Tatour’s appeal to end her house arrest.

No date for a final verdict on her case has been set, though a new hearing has been scheduled for December 28, 2017, during which both the prosecution and defence will have the opportunity to provide complementary oral summaries. If convicted, Tatour could face a sentence of up to eight years in prison.

On December 15, 2017, Alkarama sought the urgent intervention of the United Nations Special Rapporteur on the promotion and protection of the right to freedom of opinion and expression, David Kaye, requesting him to urge the Israeli authorities to put an end to Tatour’s house arrest immediately and unconditionally. Alkarama further requested that the Special Rapporteur insist that all charges held against her be dropped, as she is being held solely for her peaceful exercise of her right to freedom of expression.

Although the protection of national security is seen under Article 19 of the International Covenant for Civil and Political Rights to be a legitimate justification for restricting the right to freedom of expression, the ongoing judicial proceedings against Tatour fail to demonstrate the direct and immediate connection between the content published and the threat it might have posed. Thus, the necessity requirement for keeping Tatour under house arrest and denying her access to the internet has not been established.