Mauritania: Special Rapporteur confirms the widespread use of torture and denounces impunity 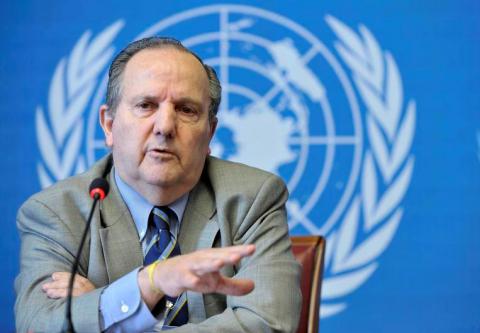 On 2 March 2017, during the 34th session of the Human Rights Council, the United Nations Special Rapporteur on torture and other cruel, inhuman or degrading treatment, Nils Melzer, presented the conclusions of the visit carried out in Mauritania by his predecessor Juan Mendez, from 25 January to 3 February 2016. The Special Rapporteur reminded the authorities of the need to apply the existing legislation and the safeguards. He also pointed out the persistence of torture, the poor conditions of detention for prisoners and the issue of pervasive impunity. As such, the Special Rapporteur made more than 30 recommendations to the Mauritanian authorities, focusing particularly on the need to apply the legislation in force and encouraging the Mauritanian authorities to take decisive steps to put an end to this practice.

On the Legal Framework for the Prevention and Punishment of Torture

The Special Rapporteur welcomed the adoption of several laws to eradicate this practice, in particular Law No. 2013-011 of 23 January 2013, defining torture as a crime against humanity, and Law No. 2015-034, adopted in September 2015, establishing a national mechanism for the prevention of torture. However, he stressed the fact that this mechanism is not operational yet, and lacks resources to fulfill its mandate. He insisted on Mauritania to ensure the full independence and impartiality of this body, once it commences its activities.

The UN expert recalled the importance of respecting all existing safeguards to protect persons from torture and ill-treatment, including the right to have access to a lawyer from the onset of the arrest.

Finally, he stressed the need to take «urgent measures to enforce existing laws and safeguards and ensure that the current practices and circumstances do not encourage torture and other ill-treatment or punishment».

On the use of torture and ill-treatment to extract confessions

For the Special Rapporteur although «acts of torture and ill-treatment are no longer rampant in Mauritania they still occur frequently, particularly in the early stages of arrest and interrogation, often for the purpose of eliciting confessions». Moreover, Alkarama also documented many cases of torture to extract confessions used to condemn victims in unfair trials. The Special Rapporteur has expressed serious concerns about this issue.

On conditions of detention and prison overcrowding

During his mission, the Special Rapporteur visited several places of detention throughout the country, including the only women's prison and a high-security prison. He noted in particular the lack of adequate sanitary and hygienic conditions, the poor quality of food as well as the limited access of detainees to health care. In his report, he also shed light on the extreme overcrowding and the impact it has on prisoners living conditions.

The expert concluded that the conditions of detention in Mauritania often amount to cruel, inhuman or degrading treatment and recommended to the authorities to introduce alternative measures to incarceration and the possibility of conditional liberty to reduce overcrowding in detention facilities.

On Impunity and the need for investigations

The Special Rapporteur finally expressed his concern about «the almost total absence of investigations into allegations of torture and ill-treatment» in Mauritania and the unwillingness of the judges to prosecute the perpetrators of such acts. In this regard, he recalled, “it is the State’s international obligation to prevent torture and ill-treatment» and “it is imperative for Mauritania to prosecute public officials, who order, condone, or cover up torture flagrantly abusing their superior authority «.

The Special Rapporteur added, «impunity for acts of torture and ill-treatment remains the rule rather than the exception, partly owing to a lack of political will by the State and its judiciary and partly owing to highly deficient procedures in monitoring and documenting information».