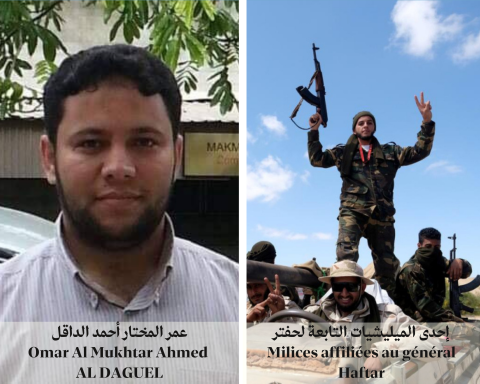 During its 93rd session held in Geneva from 30 March to 8 April 2022, the UN Working Group on Arbitrary Detention concluded that the Libyan government was responsible for the actions of militias affiliated to General Khalifa Haftar who arbitrarily arrested Omar Al Mukhtar Ahmed AL DAGUEL on 13 July 2016 at his home in Benghazi.

In its Opinion No. 11/2022, issued following the complaint filed by Alkarama on behalf of the victim, the Working Group noted the arbitrary nature of Al Daguel's deprivation of liberty and called on the State party to release him and provide him with appropriate compensation for the violations suffered.

On 13 July 2016, several heavily armed militiamen affiliated to General Khalifa Haftar broke into Al Daguel's home in Benghazi and took him by force to an unknown location. After a month of incommunicado detention, he was transferred to Al Kouifya prison, where his mother and sister were allowed to visit him for the first time.

During this visit, Al Daguel told them that he had been arrested because of his activities on Facebook while studying in Malaysia until the end of 2015. In particular, he had spoken out about human rights abuses committed by militias affiliated to Haftar.

Since his arrest to date, Al Daguel has never been brought before a competent judicial authority.

Is the Libyan Government responsible for the actions of Haftar's militias?

In its Opinion, the Working Group first sought to determine the responsibility of the Libyan Government for the actions of General Khalifa Haftar's militias on Libyan territory.
In this regard, the experts noted that the absence of the de facto control and command of the Government of National Accord, the only government recognized by the United Nations Security Council, over the militias under the command of General Khalifa Haftar, an armed group allied with Operation Dignity -a coalition of forces aligned with the Libyan National Army- does not exonerate it from its responsibilities. The Working Group considered that “the Government of National Accord should have known of the actions carried out by the Libyan National Army and its affiliates and should have taken measures to protect individuals if such actions overstepped the boundaries of legality”.

Thus, the experts pointed the responsibility of the government for the actions of the militias affiliated to General Haftar who arrested and detained Al Daguel and who control Al Kouifya prison where he is still deprived of his liberty.

The Working Group recalled that the obligation of "the State to prevent and punish crime and to uphold its human rights duties remains intact irrespective of whether the actions of the Libyan National Army can be attributed to the Government of National Accord".

The enforced disappearance of Al Daguel was considered a particularly aggravated form of arbitrary detention according to the Working Group, which recalled that "no jurisdiction should allow for individuals to be deprived of their liberty in secret for potentially indefinite periods, held outside the reach of law (...)". It added that the existence of a national law or practice authorizing arrest is not sufficient in itself to provide a legal basis for the deprivation of liberty.

Furthermore, the continued detention of Al Daguel without being brought before a competent judicial authority, while being held incommunicado, in circumstances of enforced disappearance, without access to lawyers and family, and without ever having been brought before a court or other judicial authority, constitutes, according to the UN experts, a violation of the procedural guarantees enshrined in the Covenant ratified by Libya in 1970.

The Working Group also stressed the "exceptional" nature of pre-trial detention, stating that it "must be ordered for the shortest possible time", with detention pending trial "based on an individual determination that it is reasonable and necessary for such purposes as to prevent flight, interference with evidence or the recurrence of crime", which was not the case in this instance.

The experts noted that Al Daguel's right to an effective remedy was also compromised as he was not given the opportunity to challenge his detention.

Furthermore, the Working Group recognized the "purely political" nature of the reasons for Al Daguel's arrest, which was "in direct retaliation for his criticism" of Haftar's militias. In this case, the arrest of the victim because of his Facebook posts constitutes a violation of his freedom of expression and "civic activism". In this regard, the experts recalled that "only legitimate limitations to the exercise of one’s rights and freedoms are for the purposes of securing due recognition and respect of the rights and freedoms of others and of meeting the just requirements of morality, public order and the general welfare in a democratic society" and that in the present case "the Government has not presented any legitimate reasons justifying the restrictions upon the right".

Finally, the Working Group considered that the unlawful restriction of the right to visit or access a lawyer at any time during detention, including immediately after the moment of arrest, is a violation of Al Daguel's right to a fair trial. The experts found that "without an individualized judicial assessment since his arrest (...) the pre-trial detention clearly undermined the presumption of innocence" and violated “the right to be tried without undue delay".

For all these reasons, the UN Working Group concluded that the State party was responsible for the violations suffered by Omar Al Mukhtar Ahmed Al Daguel and called on the authorities to release him by granting him appropriate reparation within the time limit set in the Opinion.

For its part, Alkarama calls on the Attorney General, who has effective control over the judicial authorities in Benghazi responsible for the detention of the victim, to implement the Opinion of the UN experts as soon as possible.