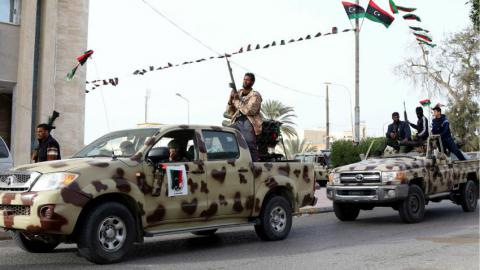 Tarek Milad Mohamed Al Gadhafi, human rights defender and former Deputy Minister of Awqaf, was abducted on 30 May 2017 by members of the police intervention of Abu Salim, affiliated to the officially recognised Government of National Accord (GNA) led by Fayez El Sarraj. Al Gadhafi is disappeared since and his relatives, who have tried to inquire about his fate and whereabouts, are extremely concerned as the forces continue to deny his detention. They fear that he might be at risk of ill-treatment, torture or even execution.

On 30 May 2017 at 6pm, Al Gadhafi was teaching to a full class of students at the Al Abbas Institute when he was arrested by members of the police intervention forces, known as the “Abu Salim forces”, wearing both uniforms and civilian clothes. These forces fall under the authority of the Ministry of Interior of the GNA. The forces who carried out the arrest were heavily armed and took Al Gadhafi to an unknown location in police cars.

Al Gadhafi is a human rights defender and founder of a human rights association documenting cases of arbitrary detention in Libya. On 30 June 2016 already, Al Gadhafi was targeted by the same forces; he was arrested and released a few days later following important media coverage of his case.

“We are extremely concerned over the disappearance of Tarek Milad Mohamed Al Gadhafi, especially since his case is not the first to be reported,” said Radidja Nemar, Regional Legal Officer at Alkarama. “The forces affiliated to the GNA must put an end to this pattern of violation consisting in abducting and detaining in secret individuals deemed to be opposing the government,” she concluded.

The case of Al Gadhafi was submitted by Alkarama to the United Nations Working Group on Enforced or Involuntary Disappearances (WGEID) on 2 June 2017; requests were made with the experts to promptly intervene with the Libyan authorities urging them to immediately inform Al Gadhafi’s family of his fate and whereabouts and to release him.

On 16 March 2017 already, the abduction of two Libyan citizens, Issa Adel Issa Kaal and Ali Suleiman Masood Abdel Sayed, was referred to this UN mechanism to clarify the fate of the two men, both abducted by forces affiliated to the GNA.