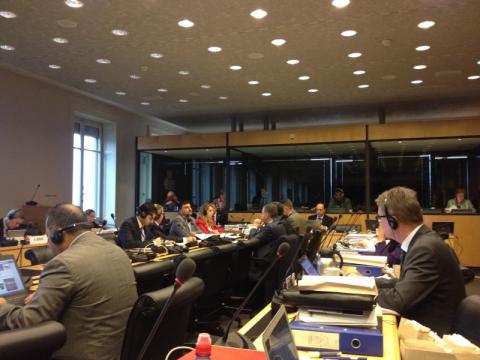 On 9 December 2015, the United Nations Committee against Torture (CAT) expressed its concern over the practice of torture in Jordan in its concluding observations, issued after the Committee analysed Jordan's National Report and engaged in a constructive dialogue with the State to assess the implementation of the Convention against Torture (UNCAT) in the country. The UN experts were especially concerned over the lack of appropriate criminalisation of torture in Jordan's legislation; the broad definition of terrorism applied by the State; the use of torture in order to extract confessions – in particular by the General Intelligence Directorate – and the conditions of detention and lack of fundamental guarantees for detainees. All the issues highlighted by the Committee had previously been raised by Alkarama in its shadow report sent to the CAT in view of the country's review.

Even though Jordan amended its Penal Code in January 2014 to remove the term "illegal torture", as recommended by the Committee in 2010, the UN experts remained concerned that, in Jordanian law, "torture is considered a misdemeanour and that punishments are not commensurate to the gravity of the acts and are subject to amnesty as well as to status of limitation." According to the UNCAT, the prohibition of torture is absolute, that is, no exceptional circumstances can be invoked to justify the practice of torture and the crime of torture should not be subjected to amnesties or status of limitation. Therefore, the Committee recommended that Jordan amends its national legislation in order to comply with its international obligations under the Convention.

The Committee shared Alkarama's concern over Jordan's Anti-Terrorism Law No. 55 of 2006 amended in June 2014, noting that the 2014 amendments "broadened the already vague definition of terrorist acts and expanded the jurisdiction of the State Security Court," which cannot be considered as independent, as it is directly linked to the executive branch and its members are appointed by the Prime Minister. The UN experts also highlighted the fact that the broad definition of torture, together with certain provisions of the Penal Code, "have resulted in substantial constrains on the work of journalists, many of whom were subject to arbitrary detention in the absence of procedural guarantees and face criminal charges before the State Security Court."

Despite recognising that the Jordanian Constitution and Criminal Procedure Code prescribe the inadmissibility of evidence obtained through torture, "the Committee is concerned that, in practice, coerced confessions or statements are still used as admissible evidence in courts." As explained by Alkarama, in Jordan, torture especially occurs against individuals who find themselves detained incommunicado by the General Intelligence Directorate to extract confessions, which will later be used to charge the suspect and constitute incriminating evidence during trials before the State Security Court.

This was the case of human rights activist Amer Jubran, who, on 29 July 2015, was sentenced to 10 years in prison by the State Security Court – a sentence that was upheld by the Court of Cassation in November 2015 – following an unfair trial during which confessions extracted under torture were admitted as evidence. The acts of torture inflicted on Amer included 72-hour long interrogations, sleep deprivation, threats to his family, and severe beatings all over his body.

Conditions of detention and lack of fundamental guarantees for detainees

The Committee also expressed deep concern over the high number of detainees held in pre-trial detention and in administrative detention under the Crimes Prevention Act of 1954, "which allows for detention without charge and raises issues about the separation of powers between the executive and judicial branches." The UN experts also highlighted that there is no explicit provision in Jordanian law prescribing the right to access a lawyer immediately upon arrest and that the Criminal Procedure Code "allows the public prosecutor to prohibit communication with a detainee for a period of not more than 10 days, renewable."

Furthermore, the Committee expressed concern over "consistent reports of widespread use of torture and ill-treatment of suspects by security and law enforcement officials, especially in detention facilities run by the General Intelligence Directorate."

Jordan's next review by the United Nations Committee against Torture (CAT) will take place in four years. In the meantime, the Committee requested the State to implement the following recommendations within a year:
• Ensure all detainees are afforded all fundamental safeguards from the very outset of their deprivation of liberty;
• Abolish the practice of administrative detention;
• Abolish the State Security Court; and
• Guarantee that coerced confessions or statements are inadmissible in practice and ensure that officials who extract such confessions are brought to justice, prosecuted and punished accordingly.