Jordan: 57-year-old Mahdi Suleiman forced to forfeit his right to assembly after protesting against the detention of his son 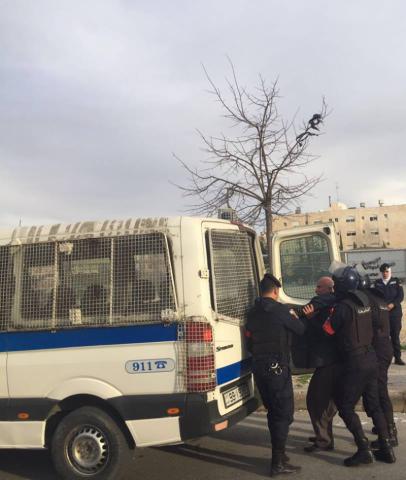 Jordanian Police arrested Mahdi Suleiman, 57-year-old, on 18 February 2016, in front of the Israeli Embassy in Amman, while he was peacefully protesting against the arbitrary detention of Palestinians by the Israeli authorities, including his son, Mohammed Mahdi Saleh Suleiman, who was arrested in 2013 at the age of 16, tortured and later sentenced by a military court to 15 years in prison for “attempting to kill Israeli settlers by means of throwing stones” following an unfair trial.

After his arrest, Mahdi was taken to the police station in Al Abdali, downtown Amman, where he was detained in poor conditions together with convicted men. He was not given a mattress to sleep on and was prevented from using the toilet. Three days later, on 21 February 2016, Mahdi was taken to the Government headquarters of Amman’s province, where he was told by the Governor himself that he would be released under the condition that he signs a statement in which he would commit to never take part in any demonstration or carry any sign with the picture of his son in public. Mahdi was released after signing this statement and a document in which he pledged not to raise his son’s case with the authorities, as well as paying 20,000 Jordanian dinars (approximately 28,350 USD) as a financial guarantee.

“It is self-evident that forcing a father to remain silent while his teenage son is arbitrarily detained by the Israeli authorities is unacceptable both morally and legally, says Inès Osman, Legal Officer for the Mashreq at Alkarama. Instead of silencing this father, the Jordanian authorities should support his legitimate claims.”

Concerned over these facts, Alkarama seized the United Nations Special Rapporteur on the rights to freedom of peaceful assembly and of association, Maina Kiai, requesting him to call upon the Jordanian authorities to render all pledges revoking rights from any citizen, including the pledges made by Mahdi, null and void, as no individual should be forced to forfeit their basic human rights. Alkarama also calls upon Jordan to stop all harassment and reprisals against peaceful protesters.