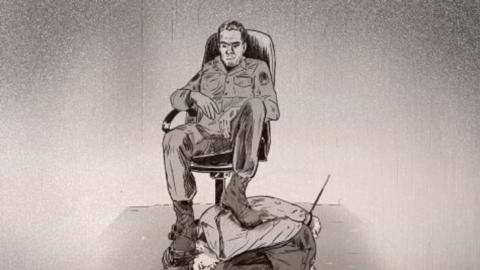 A report published by the United Nations Mission in Iraq (UNAMI) and the Office of the High Commissioner for Human Rights (OHCHR) highlighted the need to prevent torture in places of detention in Iraq, including in the Kurdistan Region, highlighting a number of issues that Alkarama had raised in recent years in this regard as part of its concerns about the human rights situation in the country.
Despite the steps taken by Iraq in terms of national legislation to criminalise torture, the UN report, which was published under the title "Human Rights in the Administration of Justice in Iraq: Legal Conditions and Procedural Safeguards to Prevent Torture and Ill-treatment", shows that this practice continues in prisons in the whole country.

Alkarama's activities
During Iraq's last periodic review before the Human Rights Council in March 2019, Alkarama presented a parallel report in which it addressed the significant deterioration of human rights in the country. Alkarama's report focused in particular on the systematic practice of enforced disappearances, arbitrary detentions, torture and summary executions in the country, which is torn by internal divisions and regional unrest. The report also highlights the misuse of Iraq's 2005 anti-terrorism law and reprisals against human rights activists, journalists and opposition groups.
Previously, the UN Committee against Torture (CAT) published its concluding observations on its initial review of Iraq on 13 July 2015. Alkarama had previously submitted an alternative report to the UN Committee against Torture, in which it outlined its main concerns regarding torture in Iraq, in particular the lack of a definition of torture, the prevailing climate of impunity, as well as the systematic use of the judiciary regarding confessions extracted under torture. It should be noted here that the Committee shared Alkarama's concerns and addressed most of the issues raised by the organisation at the time.
In addition to the widespread practice of torture, the Iraqi authorities are regularly called to appear before the UN Committee on Enforced Disappearances (CED) for failing to meet their obligations under the International Convention for the Protection of All Persons from Enforced Disappearance, which Iraq ratified on 23 November 2010.

Details of the UN report
The newly released UN report is based on interviews with 235 detainees, as well as prison staff, judges, lawyers and families of detainees, and covers the period from 1 July 2019 to 30 April this year, in line with patterns and trends documented in previous reports.
While the UN High Commissioner for Human Rights, Michelle Bachelet, acknowledged the legal changes against torture, she said in a joint statement issued by her office and the UNAMI mission that "the authorities must effectively implement the provisions enshrined in the law in each detention centre," noting that "if it is not implemented, it remains ink on paper."
One prisoner recounts the suffering he experienced saying, "I had the worst days of my life. As soon as I arrived at the prison, they beat me with metal pipes. In the following days they used two bare electric wires and electrocuted me." Another detainee said, "They handcuffed me with my hands behind my back and hung me from my handcuffs with a chain hanging from the ceiling. They did not ask me any questions but kept shouting, demanding that I confess."
The UN report expresses concern that authorities are ignoring the effects of torture and that complaints procedures appear to be unfair or ineffective. There is a clear lack of accountability for these failures and many detainees choose not to report such treatment out of mistrust or fear of reprisals.
Through the cases found by Alkarama, it appears that the Iraqi authorities allow themselves to practice torture under the pretext of fighting terrorism. However, the High Commissioner, Michelle Bachelet, believes that "the effective prevention and prosecution of torture and other forms of ill-treatment would respond to the narratives of terrorist groups and limit their ability to exploit these practices to justify the acts of violence they commit.