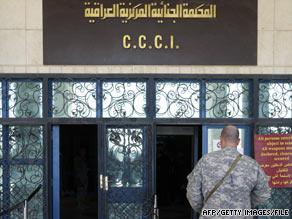 Between late 2011 and March 2012, Iraqi security forces arrested numerous individuals believed to be close to former Vice President Tariq Al Hashimi, a leading figure of the opposition. Following severely flawed trials during which confessions extracted under torture were admitted into evidence, they were sentenced to death by the Central Criminal Court under the Anti-Terrorism Law. Following a complaint sent by Alkarama on behalf 19 of Al Hashimi’s staff, the United Nations Working Group on Arbitrary Detention (WGAD) issued a decision recognising that they were victim of “collective punishment” and “guilt by association”, qualifying their detention as “arbitrary”. The group of experts called for their immediate release.

In December 2011, security forces under the orders of Prime Minister Al Maliki, raided the house of Tariq Al Hashimi, a leading member of the secular Al Iraqiya coalition, and critical voice of Al Maliki's attempts to centralise power. Not finding him at home since he had fled fearing persecution, in the following months, security forces arrested dozens of his staff as well as some of their friends and relatives.

Alkarama received the families’ testimonies of 19 of them*, including his personal secretary Rasha Al Husseini, who were arrested between late 2011 and March 2012. The victims were all taken to secret locations and prevented from contacting their families and lawyers for several months. Severely tortured – including by beatings, electrocution and rape –, they were forced to sign incriminating confessions that were later used as the sole source of evidence during their trial. The “confessions” of some of them were even broadcasted on Iraqi public TV, in violation of the principle of presumption of innocence.

After heavily flawed trials, they were sentenced to death by the Central Criminal Court – a court widely denounced for not meeting international standards of due process – under the repressive Anti-Terrorism Law No. 13 of 2005. The defendants were not provided with the effective means to defend themselves, and their lawyers faced threats from the security forces. Rasha Al Husseini and 18 men remain detained up to date.

“Subjected to facially neutral but discriminatory wheels of justice”

After Alkarama brought their case to the attention of the WGAD, on 27 April 2017, the group of UN experts issued an Opinion recognising their detention as arbitrary. Despite the Iraqi authorities argued that the legal procedure was respected, the UN experts insisted that no indisputable evidence was produced. They found numerous violations of international human rights law, including the International Covenant on Civil and Political Rights (ICCPR) – which Iraq ratified in 1971 –, rendering the 19 victims’ detention arbitrary.

The WGAD recalled that “the use of confessions extracted under torture is prohibited”, and that “death sentences passed against the 19 individuals based on confessions extracted under torture is a particularly grave miscarriage of justice”. They also insisted that rape in detention constituted a form of torture and denounced the threats of lawyers as a violation of the victims’ right to defence.

The UN experts also stressed that the victims’ detention constituted a form of discrimination as they were all targeted because they were perceived as close to former Vice-president Al Hashimi. The experts argued that “while formal collective punishment has become more rare, collective punishment under the guise of individual punishment with its legal trappings is more difficult to discern on its face. Nevertheless, in the present case of the 19 individuals with alleged connections with Mr Al Hashimi it is difficult for the Working Group not to conclude that they have been subjected to facially neutral but discriminatory wheels of justice.” The WGAD therefore concluded that “only discrimination based on political or other opinion […] may plausibly explain the subversion of the equal protection of the law experienced by the 19 individuals.”

*The victims are the following: