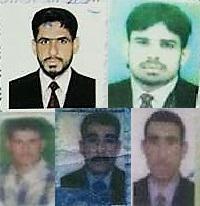 On November 7, 2017, Alkarama and Al Wissam Humanitarian Assembly submitted five more cases of enforced disappearances in Iraq to the United Nations Committee on Enforced Disappearances (CED). The five disappearances, which targeted two families, all took place in Latifiya, a small town south of Baghdad, on June 6, 2015.

Malik Al Janabi and his brother, Yasser, were both arrested by members of the 17th Division of the Iraqi Army on the night of June 6, 2015.

Malik, a 30-year-old graduate student in Islamic studies at Al Mustansiriya University, and Yasser, a 28-year-old construction worker, were both residing at their parents’ home in Latifiya when they were abducted by the soldiers.

Concerned about their fates, their family submitted a request for an inquiry to the Central Criminal Court in Baghdad, but their names could not be found in the detainees’ registry.

As part of an apparent wave of arrests that occurred in Latifiya that night, the Iraqi army also arrested three other brothers at their home: Khalid, Hamid and Walid Al Janabi. Despite having the same surname which is common in Latifiya, they are not related to Malik and Yasser Al Janabi.

The three brothers were forced into a military vehicle before being taken to an unknown location. The victims’ relatives enquired about their fates and whereabouts at the detention centre of Tasferat in Baghdad, and at the headquarters of the 17th Division of the Iraqi Army in Al Mahmoudiah, but to no avail.

These five cases are not isolated incidents, but rather add to a long list of disappearances which have occurred in Latifiya following arrests by the Iraqi army, in particular its 17th Division. This division, which operates in the region surrounding Latifiya, is a key force in the fight against the Islamic State.

The Iraqi authorities must reveal the fate and whereabouts of these five individuals, or at the very least put them under the protection of the law by acknowledging their detention.

As a party to the Convention on Enforced Disappearances (ICCPED) since 2010, Iraq has a legal obligation to halt the practice of enforced disappearances, which has reached epidemic proportions in the context of the fight against IS.