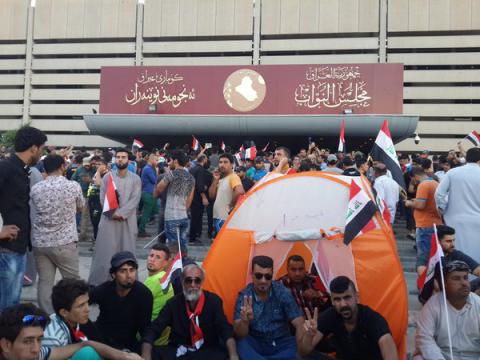 The draft law introduces limitations to free speech since it defines freedom of expression as “the freedom of citizens to express their thoughts and opinions through speaking, writing, filming or any other forms in a way that does not disrupt public order or morals”. Such formulation is vague and does not abide by article 19 of the International Covenant on Civil and Political Rights (ICCPR), which requires that restrictions to the right to freedom of expression must be “necessary” and detailed in the law. In the same manner, article 13(2) punishes anyone who “publicly attacks the beliefs of a religious sect” or “publicly insults a figure or symbol that is respected by or sacred by a religious group” with up to one year of imprisonment and a fine of 10 million dinars (about 8,500$). This provision allows for a broad interpretation which can encompass acts of free speech such as criticism of religious figures or practices that do not call for hatred or discrimination against any specific religion. However, the parliamentary committees suggested repealing this provision following protests of civil society.

Moreover, in a move aiming at turning the right to freedom of peaceful assembly into a privilege granted by the authorities, article 7 of the draft law requires a permission from the head of the Province Administrative Unit to hold public assemblies. Following widespread opposition to the draft law, the parliamentary committees proposed to amend the text to only require a “notification”, in line with international standards. However, this amendment specifies that the head of the Administrative Unit holds “the right to reject the request”, maintaining a de facto procedure of approval. Grounds for denying the permission to hold a protest are if the latter constitute a “threat to national security or public order and public morals”. This provision could be invoked by the authorities to stifle criticism of the government and its policies. Indeed, security forces often crackdown on peaceful protests pretexting that they constitute a threat to national security. In summer 2016, peaceful protests condemning corruption within the government were considered as a “terrorist threat”.

In addition, under the law, the “subject and purpose” of the demonstration and the “names of its organising committee” must be communicated to the Iraqi authorities. Given the current situation in the country, where protesters are often arrested, interrogated and even subjected to enforced disappearance by the authorities, this requirement would pose a significant threat to their personal security.

“Despite the protection of the rights to freedom of expression and peaceful assembly under article 38 of the Iraqi Constitution, it is clear that the draft law renders this provision completely meaningless, in addition of not being in compliance with the ICCPR, to which Iraq is party since 1971,” says Rachid Mesli, Legal Director at Alkarama. “The Iraqi authorities must amend the draft law to fulfil their obligation to guarantee the basic rights and freedoms of all Iraqi citizens; any restriction must be clearly defined, necessary, and proportionate to the threat to interest protected.”