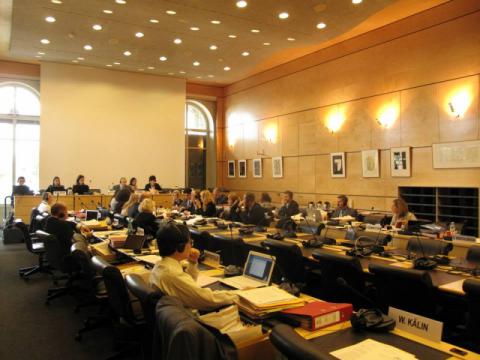 On 25 September 2015, Alkarama submitted its shadow report to the UN Human Rights Committee (HRCTee) in view of its fifth review of the country during its upcoming 115th session on 26-27 October 2015. Denouncing the violations of the right to life, the widespread practice of torture and the lack of observance of fair trial guarantees under the pretext of the fight against terrorism, the report includes several recommendations on how to tackle these issues.

During the session, the Committee's experts will in fact assess the implementation of the International Convention on Civil and Political Rights (ICCPR), binding upon Iraq by virtue of its ratification in 1971, on the basis of information from NGOs including Alkarama, and from the State in a report submitted with a 13-year delay.

Violations of the right to life

Violations of the right to life in Iraq include the extrajudicial killing of civilians often as reprisals in the fight against the Islamic State, as well as the deaths caused by the authorities' excessive use of force in dispersing protests. In addition, death sentences are handed down following flawed trials and often for crimes falling under the vague Iraqi Anti-terrorism Law No. 13 of 2005. Moreover, not only is the death penalty in Iraq so largely used that Iraq ranks as the 4th country worldwide in the number of capital executions, but the authorities are even now keen in speeding its application under the pretext of the extraordinary security situation, by no longer requiring the President to ratify executions.

Widespread use of torture

Alkarama's report denounced that "the lack of adequate guarantees under Iraqi law, although Iraq ratified the Convention against Torture (UNCAT) in 2011, and the heavy flaws in the administration of justice and in the treatment of detainees, lead to the widespread and systematic use of torture in the country." Torture is in fact commonly used in Iraq to extract information later used as evidence in proceedings. Additionally, provisions such Article 136.b of Iraqi Code of Criminal Procedure, permitting prosecution of government officials involved in the abuse of detainees only if allowed by the relevant Ministry – for example the Ministry of Interior in a case involving a police officer – hinder prosecution of perpetrators and accountability for abuses.

Despite the Iraqi report's reference to several guarantees in national law, the Iraqi judicial system consistently fails to respect fair trial guarantees at all stages of legal proceedings. Arrests are carried out without warrants, pre-trial detention can last several years and accused are convicted on the sole basis of testimonies of secret informants or "confessions" extracted under torture by panels of judges lacking any guarantee of independence.

Furthermore, Alkarama's report raises concerns over the fact that the Iraqi Anti-Terrorism Law No. 13 of 2005 opens the door to abuses. The broad definition of terrorism it provides allows for its use against any critical voice, while mandating for the imposition of the death penalty. This is the case for instance of Ahmad Al Alwani, a prominent member of the secular Al Iraqiya political block within the Iraqi Council of Representatives well known for his criticism of the Iraqi Prime Minister's policies, who was sentenced to death on 23 November 2014 by the Central Criminal Court of Iraq on the base of this law.

The issues mentioned above are just a few of the many concerns Alkarama shared with regards to the implementation of the Covenant in Iraq but must, at the same time, be addressed as a matter of priority. In particular, in order to put an end to the human rights violations recorded and ensure full respect of the ICCPR, Iraq should, among others:

• Place an immediate stay on all pending death sentences and issue a moratorium on the death penalty, in view of its full abolition;
• Include in Iraqi legislation the absolute prohibition and adequate criminalisation of torture, guarantee that statements extracted under torture are inadmissible in legal proceedings;
• Ensure that arrests are carried out upon presentation of a warrant, that pre-trial detention is strictly limited, that the right to defence is ensured and the admissibility of testimonies of secret informants is prohibited;
• Amend the Anti-Terrorism Law No. 13 of 2005 to ensure the crime of terrorism is strictly defined in order to leave no room for abusive interpretation and application of the law;
• Investigate effectively, promptly, thoroughly and impartially all allegations of violations and, where appropriate, prosecute those responsible and provide an effective remedy to the victims.

Alkarama hopes that the concerns raised in its shadow report will be addressed constructively during the dialogue between the Human Rights Committee and the representatives of the State Party in order to put an end to all these violations of human dignity.