International Day against torture : Torture as a form of revenge against demands for democracy and political reform 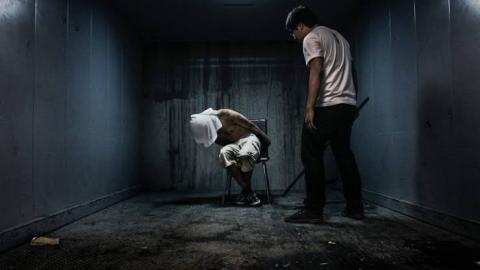 Despite the absolute prohibition of torture by the Convention and more broadly by international law, these torturous practices persist in certain regions of the world. Even today, many States parties fail to fulfil their international commitments. Although, in accordance with the Convention ratified on 12 September 1989, torture is banned in domestic legislation, the reality on the ground is quite different.
Since its creation in 2004, Alkarama has documented a considerable number of violations that attest to a systematic and institutionalised practice of torture. These acts, qualified as crimes against humanity, continue with impunity. Sometimes, this impunity even reaches its peak through the adoption of amnesty laws in favour of the perpetrators (cf. the ِAlgerian Charter for Peace and National Reconciliation, Order No. 2006-01).
Over the years, cases of torture have continued to increase and Alkarama continues to receive testimonies from victims of torture. The most recent case is that of Abderrahmane Labreche, a former British-Algerian teacher-researcher who was arbitrarily arrested by the Algerian intelligence services during a visit to the country and tortured until his release.
Alkarama's concerns remain regarding the multiplication of violations in the context of the second anniversary of the Algerian "Hirak", a non-violent popular uprising seeking democracy. This concern is rightly shared by the Office of the High Commissioner for Human Rights (OHCHR) which has received "new allegations of physical and sexual violence in detention".
Torture is a prominent feature of Arab regimes, although many governments have ratified the Convention against Torture.
Over the past years, the pace of repression has escalated and taken many forms, given the multiplicity of parties involved in violations, and the increased impact of armed conflicts in the spread of a climate of impunity for the crimes of kidnappings, enforced disappearances and torture, not to mention the repercussions of the Corona pandemic and its use as a pretext in many cases to practice repression and human rights violations.
From Egypt, through Syria, the UAE, Saudi Arabia, Iraq, Lebanon, Algeria, Morocco, Sudan, Jordan, Bahrain, Yemen, Mauritania and others, Alkarama documented cases of torture and submitted complaints and reports to the relevant mechanisms of the United Nations, seeking its intervention to provide redress to the victims and combat the policies of torture and impunity.
In earlier times, the security services in the Arab world resorted to torture as a means to coerce victims to make confessions, but in the wake of the Arab revolutions since the beginning of the second decade of this century, torture methods have become part of the tools of repression to take revenge on activists in particular and people in general for their demand for freedom.

Torture is systematic in Egypt
In Egypt, torture practices are systematic from the moment of arrest and during detention in jails. Since the arrival in power of Marshal Abdel Fattah Al Sissi, political opponents of the regime have been systematically arrested and most often detained in an arbitrary manner in conditions of detention that do not respect the minimum standards of detention in accordance with human rights (isolation, deprivation of daylight, physical violence...) and often with a deprivation of medical care, which is a form of moral and physical torture.
This type of detention was the cause of the death of the late President Mohamed Morsi who was deprived of medical care until he died. Alkarama submitted a complaint to the Working Group on Arbitrary Detention on 10 July 2013 to which led to the recognition by the Group of the arbitrary nature of Morsi's detention and shed light on the inhumane conditions of detention to which he was subjected.
Egypt is also waging a merciless war against journalists and human rights defenders, extracting confessions from them under torture to be used in unfair trials. One such case is that of Egyptian journalist and Aljazeera correspondent Abdul Rahman Shaheen, who was forced to sign a false confession under torture and was also subjected to ill-treatment and humiliation while in detention. Alkarama submitted his case to the Special Rapporteur on freedom of expression and opinion on 6 September 2017.

Yemen is a scene of torture
In Yemen, journalists released from Houthi prisons disclosed horrific torture methods, about which Alkarama submitted complaints to the United Nations. A number of these journalists are still in arbitrary detention and face execution under trials before judges appointed by the Houthi rebels.
On November 12, 2019, Alkarama wrote the UN Special Rapporteur on extrajudicial, summary or arbitrary executions, Agnes Callamard, regarding the killing of the Yemeni youth, Ibrahim Al-Shamsani, under torture in a prison in the Kingdom of Saudi Arabia, according to what was proven by the forensic doctor’s report.
Ibrahim Muhammad Mahyoub Saeed Al Shamsani, born in the Yemeni governorate of Taiz, is 35 years old, and works as a first lieutenant in the Yemeni Coast Guard forces. He took over more than one police mission in protecting Yemeni ports, and was appointed Director of Communications in the port of Hodeidah,. He was trained in the Jazan region in the south of the Kingdom and obtained certificates in several military courses.
Al-Shamsani was arrested on the Yemeni island of Mayon, overlooking the Bab al-Mandab Strait, and taken to a Saudi barge and from there to a prison in Jazan, in the south of the Saudi Kingdom.
His family does not know when he was arrested, but states that his last contact with them was via a phone call during his military service on Mieun Island, on June 17, 2019.
On July 31, 2019, his family was surprised by a message from a Yemeni officer stating that they had received a note from Saudi intelligence that he had committed suicide by hanging in Jazan prison, while his family did not know before that that he was detained by the Saudis.
According to the testimony of his colleagues, Saudi officers came and arrested him while he was serving on Mayon Island, in collusion with Yemeni officers.
His family presented him to the forensic doctor, who conducted an examination of the corpse, and in turn issued a report confirming that he had been tortured. Alkarama obtained a copy of the forensic report, and obtained horrific photos showing traces of torture on the victim’s limbs, including nail removal, and bruises on the soles of the feet as a result. The forensic report states that al-Shamsani’s death was the result of suffocation with a sharp object.

Emirati secret prisons in Yemen
The UAE has established secret prison networks in many Yemeni regions, including secret prisons in the Balhaf facility run by the French company Total in the Shabwa governorate in the southeast of the country, in addition to other prisons supervised by Emirati officers and run by militias created and funded by the UAE and acting by proxy for it.
In this context, Alkarama documented the case of the two brothers, Muhammad Saeed Omar Al-Qumaishi and Saleh Saeed Omar Al-Qumaishi, who are still forcibly disappeared in secret prisons belonging to the UAE in southern Yemen since their receipt from the UAE-backed security authorities in Aden in September 2016.
The family of the two brothers says that they were able to see the two victims in Mansoura prison in Aden during September 2016, and noticed the traces of torture on their bodies.

The fight against torture in the Arab World is far from over. It is essential to continue with determination this fight in the name of human rights by attaching particular importance to respect for international commitments in order to ensure that the rights of victims and their dignity are restored.