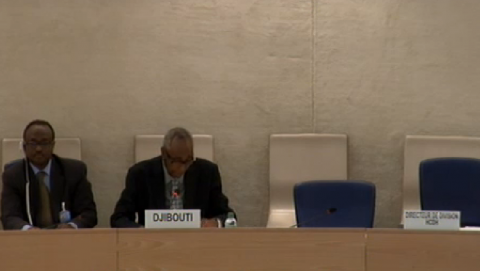 Ahead of the 2018 Universal Periodic Review (UPR) of Djibouti by the Human Rights Council (HRC), Alkarama submitted a report in October 2017 highlighting our main concerns with regards to the current human rights situation in the country.

The issues raised by Alkarama include the serious violations of the human rights of detainees, the authorities’ lack of cooperation with UN human rights mechanisms, as well as the severe repression of members of the opposition, as well as journalists and human rights defenders. Alkarama made a total of 17 recommendations to the state.

The UPR process involves a periodic review by the HRC of the human rights situation in each UN Member State every four years. Djibouti’s review will take the form of a discussion between representatives of Djibouti and the 47 UN Member States which make up the HRC, during which the council will make recommendations to improve the human rights situation in the country.

Arbitrary detention and violations of the right to a fair trial

The practice of arbitrary detention continues to be used by the authorities to silence anyone, including political opponents, peaceful protesters, journalists, and in some cases minors, who denounce human rights violations in the country.

Violations of procedural safeguards are systematic, and include abusive arrests without judicial warrants, incommunicado detention, and the extortion of confessions which are later used as evidence in unfair trials. Additionally, detainees are prohibited from consulting a lawyer on a regular basis.

Despite being prohibited by Article 16 of Djibouti’s Constitution, torture is still widely practiced in the country. Many cases of torture and ill-treatment have been documented during violent arrests, police custody or in detention. Torture is also practiced as a means of retaliation or punishment, and for the purpose of obtaining confessions which are later used as the only source of evidence in unfair trials to convict the accused.

The lack of a clear definition of torture, as well as a prevention and complaint mechanism and prompt, impartial and effective investigations into allegations were also raised as major concerns in Alkarama’s report.

Although Djibouti’s Constitution guarantees the right to freedom of expression, association and peaceful assembly, these rights remain severely limited in the country. The authorities continue to detain prisoners of conscience convicted after unfair trials, while an increasing number of travel bans are also imposed against journalists, human rights defenders and political opponents.

Furthermore, Djiboutian civil society is still suffering from a lack of visibility and recognition mainly due to legal and administrative obstacles to the creation of associations.

Finally, Djibouti’s political opposition continues to be repressed and kept out of the country’s political affairs; some political parties have been banned and the guarantee of a legal status for the opposition has so far been unsuccessful.

Violations of human rights in the fight against terrorism

Finally, Alkarama stressed that the decree of November 24, 2015 introducing a number of "exceptional security measures" under the pretext of the fight against terrorism, as well as the law of December 31, 2015 establishing a state of emergency, have unjustifiably restricted fundamental freedoms, including freedom of association and peaceful assembly.

These "exceptional security measures" led to numerous human rights violations, including arbitrary arrests and detentions, as well as the disproportionate use of force during the 2015 electoral process. In its report, Alkarama argued that the real objective of the government is not counterterrorism, but rather to repress the opposition.