Djibouti: Waves of Arrests of Young Students and Opposition Members 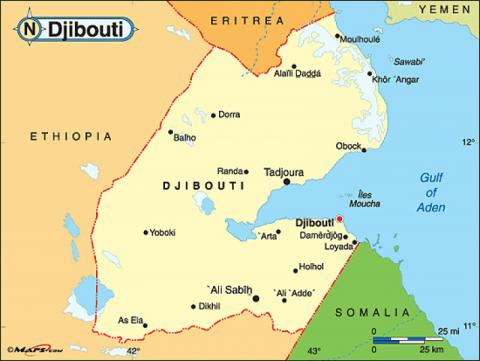 On 12 November 2015, Alkarama and the Djiboutian League for Human Rights (LDDH) sent an urgent appeal to the United Nations Special Rapporteur on the Rights to Peaceful Assembly and Association (SR FPAA) following the recent waves of arrests in Djibouti. The arrests have affected many young people, including minors, of which 13 remain detained in particularly difficult conditions in the premises of the gendarmerie or at the Gabode prison. Despite efforts undertaken by their lawyer, they have not been able to benefit from their right to visits or a medical examination.

On 1 November 2015, six minors aged between 13 and 15 years, Mohamed Guireh Guelleh, Hamze Mohamed Fod, Aptidon Ayanleh Osman, Abdourachid Houssein Farah and Mohamed Aden Ahmed met at the headquarter of the Movement for Democratic Renewal (MRD) − a party of the opposition coalition, the National Salvation Union (USN) − in the Balbala Sheikh Moussa neighbourhood in Djibouti City, to peacefully celebrate the Day of African Youth. According to witnesses, the police appeared on the scene and carried out violent arrests before ransacking the party's premises.

The next day, while being detained at the local police station, the police went to Mahamoud Guedi Moussa's home in the T2 neighbourhood of Balbala. During his arrest, the young member of the Youth Opposition Movement (MJO) was severely beaten in front of his family before being taken to the police station.

Accused of "participating in an illegal demonstration", "damaging public property" and "assaulting police officers", the six minors were placed in custody at the Gabode prison on 4 November 2015. At their hearing before the tribunal on 9 November, their lawyer and president of the LDDH, Mr. Zakaria Abdillahi Ali, asked for their provisional release, but the judge rejected his demand and their case was reserved until 16 November 2015.

Detained on the same charges Mahamoud Guedi Moussa had appeared in Court the day before. Despite the nullity of the proceedings, including the absence of a lawyer while in police custody, his case also was reserved until 16 November 2015. All victims are still held at the Gabode prison under harsh conditions. In particular, Alkarama remains concerned that minors do not seem to be held in areas separated from the adults.

Arrests of young students on 8 November for refusing to demonstrate

In the continuity of the arrests carried out early in the month, several high school students from Ali Sabieh city were arrested on 8 November while they were at the Arrey School. Thus, Hamza Mahamed Robleh, Ainan Absieh Omar, Apditon Omar Aden, Ali Daher Abdillah, Aden Djama Robleh, Abdo Sougueh Kalab and Yacin Mahamoud Omar were arrested by the police, who accused them of refusing to participate in a demonstration organised in support of a fourth term of the incumbent president, Ismail Omar Guelleh, on 1 November. Taken to the police station, to date they have not been able to benefit from their lawyers' assistance or to receive visits from their families.

Violation of freedom of expression and peaceful assembly

These waves of arrests occur in a politically difficult context for Djibouti, when the president announced his desire to run for a fourth consecutive term while the opposition and civil society continue to face difficulties when it comes to freely exercising their activities. Thus, 50 people were arrested between October and November 2015 for demonstrating their opposition to a fourth term of the President, including several cases documented by Alkarama.

"Since September 2015, the arrests and intimidation of civil society and opposition members have increased, reflecting the authorities' will to refuse the opening up of the political field allowing the population to freely exercise their basic rights," said Rachid Mesli, Legal Ddirector at Alkarama. "It is fundamental that the Djiboutian authorities put an end to such judicial persecution and that they open up for a genuine democratic dialogue in the country."

In order to put an end to these arbitrary arrests, Alkarama and LDDH seized the UN Special Rapporteur on the Rights to Peaceful Assembly and Association (SR FPAA) for him to call on the Djiboutian authorities to immediately release the 13 young detainees and to ensure that all citizens can freely demonstrate and peacefully express their opinions without fear of reprisals.