Yemen: Dismay following the failure of the United Nations to renew the mandate of the Panel of Eminent Experts on Yemen 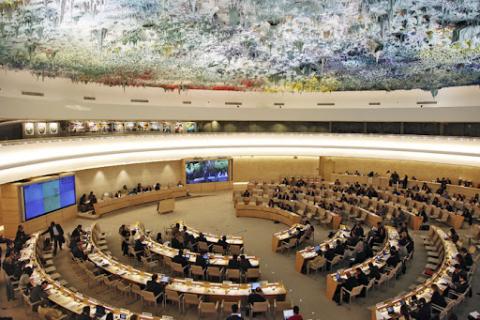 The undersigned civil society organisations express their condemnation and deep disappointment at the decision of the UN Human Rights Council to terminate the mandate of the Panel of Eminent Experts on Yemen, the only impartial international mechanism tasked with investigating human rights violations and gross violations of human rights and humanitarian law committed by all parties to the armed conflict in the country. The organisations stress that ending the mandate of the UN Panel of Experts will only reinforce a climate of impunity and serve as a green light for all parties to the armed conflict to continue perpetrating even more brutal violence.
The Council's decision not to renew the mandate of the Panel of Eminent Persons represents a historic failure by the international community to uphold international law and a failure to provide the tools necessary to protect civilians in Yemen at a time when the country is facing the world's greatest humanitarian disaster. According to the UN, the formation of the Panel was a direct result of multiple patterns of violations and abuses of international human rights and humanitarian law, which necessitated the formation of the Panel of Eminent Experts to conduct investigations.
In the face of the Council's shameful failure to fulfil its duty, UN Member States, who share our interest in the decent lives of the Yemeni people and our belief in the need to respect international law, should redouble their efforts to ensure:
1. The formation of an international investigative body similar to the Panel of Eminent Persons,
2. The implementation of the recommendations of the Panel of Eminent Persons regarding accountability for crimes committed in Yemen under international law.
At the same time, we affirm that Member States will not be able to stop the damage caused in Yemen and protect international justice, accountability and the rule of law but there is a need to renew and strengthen efforts in this regard.
In light of the above, we reiterate the call by over 60 organizations to the United Nations strengthen accountability in Yemen, including through the formation of an international criminal investigation body focused on how:
1. Gathering and preserving evidence, preparing cases and facilitating fair and independent criminal proceedings, in accordance with the standards of international law.
2. Laying the foundations for effective remedy, including compensation for victims.
The recent report by the Eminent Persons' Group, "A Forgotten Nation: A Call to Humanity to End Yemen's Suffering", described the brutal attacks on civilians across the country by Saudi and Emirati coalition forces and the Ansar Allah, a Houthi armed group. The report warns that the lack of political will on the part of the parties to the armed conflict and the international community to ensure effective accountability for violations of international law remains a major impediment to halting the tragic harm to civilians and wider humanitarian suffering in the country. This requires concerted efforts to break this impasse and ensure accountability for the suffering of the Yemeni people.
The protracted conflict has ravaged the country and its people. At least 233,000 people have died, 102,000 as a direct result of the hostilities and 131,000 as a result of other conflict-related causes, such as starvation or the destruction of health services and infrastructure.
Continued attacks on homes, schools, hospitals, civilian infrastructure and humanitarian aid have pushed Yemen into one of the largest famines in modern history. Currently, more than 400,000 Yemeni children are at risk of starvation and malnutrition, while 16.2 million people are acutely food insecure as a direct result of the belligerents' deliberate starvation of Yemenis as a tactic of war.

We are deeply dismayed that 21 of the 47 members of the Council voted against the renewal of the mandate of the Panel of Eminent Persons and that 7 countries abstained, despite the massive human suffering and continued brutality to which the Yemeni people are being subjected by all parties to the armed conflict. The vote also saw 4 countries abstain from voting in previous years to "reject" the renewal of the Panel's mandate: Bangladesh, Indonesia, Senegal and Togo, in addition to the 17 countries that refused the renewal, among them: Bahrain, Bolivia, Burkina Faso, China, Cuba, Eritrea, Gabon, India, Libya, Mauritania, Pakistan, the Philippines, the Russian Federation, Somalia, Sudan, Uzbekistan and Venezuela. Eight countries abstained: Armenia, Ukraine, Côte d'Ivoire, Cameroon, Malawi, Namibia, Nepal and Japan.
It should be noted that in the run-up to this vote, the Kingdom of Saudi Arabia, the Arab Group member states and the Organisation of Islamic Cooperation led a tireless campaign of pressure against the decision to renew the mandate of the Group of Eminent Persons. The Panel, among others, has repeatedly accused Saudi Arabia, the United Arab Emirates and others of violations of international human rights and humanitarian law in Yemen. We assert that this pressure campaign represents a blatant attempt to ensure impunity for the crimes attributed to the coalition in the report, eliminating the possibility of accountability and serious justice for the Yemeni people.
And the countries that voted against or abstained from voting against the resolution to renew the mandate of the Panel of Eminent Persons decided to support Saudi Arabia rather than protect the Yemeni people and uphold law and justice. Such political manoeuvring rarely violates any of the fundamental concepts of human dignity and the obligations of Council members to uphold the highest standards in the promotion and protection of human rights.
This outcome was not inevitable. On the contrary, it clearly reflects the continuing lack of leadership and political will on the part of UN member states, which claim to uphold the highest human rights standards, to hold repressive and authoritarian states to account before the Human Rights Council.
This failure is a wake-up call and a turning point that is meant to be taken by countries seeking to adopt a principled approach to human rights. What is needed now is a more courageous, non-discriminatory, victim-oriented approach, transforming this approach into genuine initiatives that value the protection of victims everywhere over the prejudices of the consensus, and value international human rights law more than a mere compromise.
We call on UN Member States to:
1. Review the practice of non-competitive elections to the UN Human Rights Council, including ensuring that regional groups no longer submit closed lists.
2. Take steps to ensure that members of the Human Rights Council are accountable to their obligations to uphold the highest human rights standards, including not engaging in any practice or pattern of intimidation, attacks or reprisals against human rights defenders.
The Yemeni people and the victims of human rights violations around the world deserve this, to say the least.
The signatories: