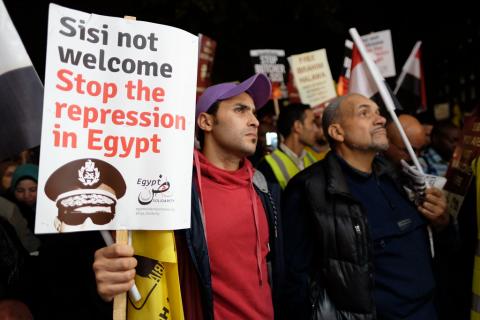 United Nations independent human rights panel warned of "serious and unnecessary" risks faced by human rights defenders arrested in Egypt for prolonged pre-trial detention . Experts said in a press release that the risks are most evident during the Covid-19 pandemic, and called on authorities to facilitate the release of chronically ill prisoners or detainees without an adequate legal basis.
Alkarama shares the concern of experts in this regard, and indeed has closely followed the cases of numerous political detainees in Egyptian prisons, including the late President Mohamed Morsi, whose death was announced on June 17, 2019, as UN experts confirmed at the time that his death was directly linked to conditions of detention in Egyptian prisons. The experts also warned that other prisoners may suffer the same fate if Egypt does not address the issue of deteriorating conditions of detention in prisons, but the Egyptian government ignored the warnings, and the result was the deaths of other detainees, the last of which was a leader of the Muslim Brotherhood, Essam El-Erian.
On July 10, 2013, Alkarama filed a complaint with the United Nations, calling for urgent intervention with the military regime to protect President Morsi, his advisers and detained members of the legitimate government from torture and asked for their immediate release.
Subsequently, the United Nations Working Group on Arbitrary Detention, made up of five independent experts, issued a resolution on November 13, 2013 calling on the Egyptian regime to release President Morsi and his companions, considering that "the deprivation of Morsi and his freedom advisers is arbitrary ”.
Independent UN experts say they have relied on independently verified third-party reports, with few publicly available statistics on Covid-19-related deaths in Egyptian prisons, and experts said: “With few physical distancing measures in place in these prisons, we fear the death toll will be much higher than the cases confirmed so far. "
Experts added that detained activists have few opportunities to report their medical condition, and they also do not have the opportunity to challenge charges they face under national security legislation.
The experts raised the question of the arrest and trials of the activists, noting that they violate international human rights standards: “Many sessions for the renewal of pre-trial detention are being held in l In the absence of the defendants and lawyers, the defendants are brought before the court and tried in large groups without consideration of personal or medical situations. "
Experts stressed that what is happening is the denial of the right to a fair trial, at a time when the authorities should step up their efforts to facilitate the release of prisoners detained without an adequate legal basis or suffering from chronic illnesses.
Human rights experts shed light on the case of Ibrahim Ezz El-Din, advocate for housing rights and against illegal evictions, who was forcibly disappearance for 167 days in 2019 and was allegedly tortured .
Experts explained that Ezz El-Din is now in prison and has not been able to apply for temporary release, despite suffering from a pre-existing respiratory illness.
Experts said: "No circumstance whatsoever can be invoked to justify enforced disappearance".

Ezz El-Din is just one of many human rights activists whose lives are in danger. Other activists include Esraa Abdel Fattah and Sanaa Seif, both human rights defenders, and Rami Kamel who is an advocate for the Coptic Christian minority, and neither of them has been allowed to have regular contact with her. family or lawyer.
Experts added that they were in direct dialogue with the Egyptian authorities on these and other issues, and pledged to closely monitor the situation.
The expert, Mary Lawlor, Special Rapporteur on the situation of human rights defenders, drew attention to "credible allegations" of human rights violations, including torture.

"There are credible allegations that some Egyptian activists have been subjected to arbitrary detention, enforced disappearance or torture solely for defending human rights," Lawlor said. Lawlor stressed the need to release detained activists and recognize the important role they play in society. Experts also stressed the importance of independent access to information on the conditions of detainees in order to reduce the risk of torture and gross human rights violations, adding that "during the pandemic, this issue becomes more important ".

Special rapporteurs are part of what are called special procedures of the Human Rights Council. The special procedures are the largest body of independent experts in the United Nations human rights system and are the general name for the Council's independent investigative and monitoring mechanisms that deal with either country-specific situations or problems from a thematic perspective in the world. Experts work on a voluntary basis and are neither United Nations officials nor paid for their work. Experts are independent from any government or organization and serve in an individual capacity.