Egypt: Yasser Essawy’s life at risk because of denial of medical care and torture in detention 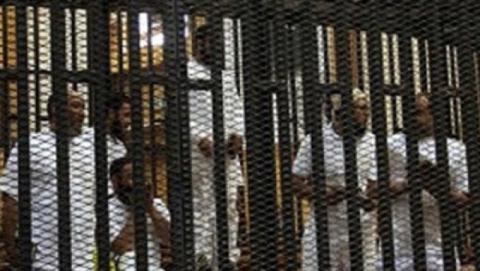 In late March 2016, Yasser Essawy Ahmed Essawy, a sales representative detained since his arrest in October 2013, was urgently hospitalised to receive surgery in a Cairo hospital. Disregarding the doctor’s recommendation, the prison personnel refused the continuation of his hospitalisation after his surgery and sent him back to prison before he had time to properly recover. Even though he was put in the medical section of Tora prison, Yasser Essawy, 41 years old, has been continuously refused medical care since. Hence, his family reports that his state continues to decline, putting his life at risk. As a consequence, Alkarama solicited the United Nations Special Rapporteur on the right to health (UNSRH) to ask the Egyptian authorities to guarantee that Yasser Essawy is granted appropriate medical care and hospitalised again, if need be.

On 13 October 2013, at night, members of the Homeland Security together with officers from the Central Security Forces, raided Yasser Essawy’s home, in Arafat City, North of Cairo. They first broke down the garden gate and then the entrance door, without warnings. Once they had stepped into the house, they started to search the rooms while acting violently towards Yasser Essawy and his family and confiscated several of their personal belongings. Then, they handcuffed him, dragged him out of the house and forced him in an armoured vehicle.

Brought to Al Aqrab prison – Tora high-security section, Yasser Essawy reported having been tortured, a recurrent practice in this detention centre, including against youths such as 19-year-old Ammar Mohammed Mohammed Mahmoud, tortured there after his arrest in November 2014. Eventually charged under terrorism charges by the public prosecutor, Yasser Essawy declared that he was not provided medical attention after the torture he suffered from, contributing to the deterioration of his health state.

Sent back to prison against the doctor's advice

Furthermore, his relatives were refused the right to visit him in November 2015, as for all the other relatives of prisoners detained in this section. Hence, they were unable to bring him food, clothes or medication. As a consequence, Yasser Essawy started to feel particularly ill and on 20 March 2016, the prison authorities authorised his urgent evacuation to Kasr Al Aini hospital of Cairo. There, he received surgery on 3 April and the doctor recommended keeping him under observation. Instead, the prison personnel sent him back to Liman prison – Tora prison medical facility – where he was completely refused medical attention.

While his trial started - the next hearing is scheduled for 30 April before Cairo Criminal Court, Yasser Essawy remains detained in particularly harsh conditions in Tora prison. In fact, his family believes that he could die if he is not granted immediate medical care. His case is not isolated however and in a comprehensive public report published in November 2015, Alkarama documented hundreds of deaths that occurred in Egyptian detention centres between July 2013 and September 2015 resulting from lack of medical care and/or torture.

“Denial of medical care in detention, as for the case of Yasser Essawy, is a means of repression of political opponents by the Egyptian authorities. Coupled with family visits’ prohibition and poor conditions of detention in general, such treatment can amount to torture, according to the United Nations Special Rapporteur on Torture (UNSRT)”, said Rachid Mesli, Alkarama Legal Director.

The Egyptian authorities should take effective measures and ensure that all prisoners are provided appropriate medical care in detention. Their status of prisoner, journalist, human rights defenders and political opponents should not be used as a reason to discriminate against them in this regard. In this sense, Egypt is bound by Article 12 of the 1966 International Covenant on Economic, Social and Cultural Rights (ICESCR) ratified by Egypt in 1982, whose scope of application was further specified in General Comment n°14 of 2000 of the Committee on Economic, Social and Cultural Rights (CESCR).