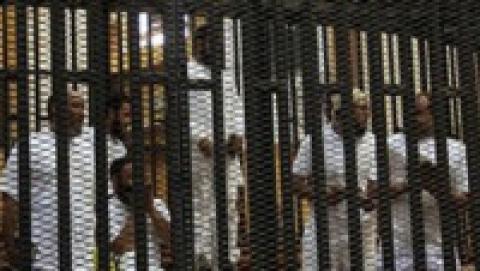 All were prosecuted under accusations of having formed a group during the Raba'a Al Adawiya sit-in in August 2013 and to have given orders to the protesters to "spread chaos around the country", in particular through media. This sit-in had been violently dispersed by the police and the army on 14 August 2013, leading to the death of more than a thousand of demonstrators, in what characterises a crime against humanity.

On 19 May 2015, few days after the journalists had been sentenced by Cairo Criminal Court, Alkarama asked the WGAD to issue an opinion stating the arbitrary nature of their detention. Alkarama based its arguments on the facts that their trial and detention were in violation of international human rights law. In fact, the journalists were repeatedly subjected to torture during their pre-trial detentions during which they were either detained incommunicado or in solitary confinement. During the trial, their lawyers were not allowed to challenge the evidence brought against them by intelligence services and could not call their own witnesses. Finally, the victims could not follow their own trial as they spent the entire hearings in sound-proofed boxes and were eventually kept away from the courtroom when the verdict was read by the judge.

In addition to these blatant fair trial violations, Alkarama underlined that the charges brought against them were criminalizing their peaceful and legitimate work as journalists, especially since they referred to their coverage of the Raba'a Al Adawiya and El Nahda Squares' massacres on 14 August 2013. Their reporting has been considered by the authorities as crimes of "fabricating pictures and scenes that imply fatalities and injuries among demonstrators, preparing statements in foreign languages and publishing all of this outside Egypt to imply that security forces used excessive force and violated human rights".

In its Opinion n°7/2016, the WGAD stated that the journalists' deprivation of liberty "is arbitrary, being in contravention of articles 5, 9, 10, 11 and 19 of the UDHR and articles 7, 9, 10, 14 and 19 of the ICCPR." In other words, the experts not only acknowledged that the journalists' trial was unfair but also that they have been deprived of their liberty because of their work as journalists and for peacefully expressing themselves. Consequently the independent UN experts requested their immediate release as well as a compensation for their suffering.

The Working Group rightfully emphasized that their case was not isolated and that there was in fact "a systemic problem of arbitrary deprivation of liberty of journalists in Egypt." This statement was illustrated by the arrests of dozens of them in the past months and by the first-ever raid against the Press Syndicate by the police, on 2 May 2016. The experts' observations on the current state of press freedom and of freedom of expression in the country comes in addition to the concerns raised by the UN Special Rapporteur on freedom of expression (SR FREEDEX) in a letter addressed to the Egyptian authorities in October 2015.

Finally, the WGAD also referred the case to the Special Rapporteur on Torture (SRT) given that the journalists have also been subjected repeatedly to torture as well cruel, inhumane and degrading treatment since their arrest and until now. The experts urged the Government to "fully investigate the circumstances surrounding their arbitrary detention, and to take appropriate measures against those responsible for the violation of their right." They referred particularly to the fact that despite the journalists' multiple claims to the public prosecutor about the torture they suffered, no investigation was launched.

The nine men are currently facing retrial before Cairo Appeals Court, along with the 42 other defendants in Raba'a Operations Room case, after the Court of Cassation accepted their appeals. The hearings have been repeatedly postponed however and it is too early to say when the Court will announce its verdict, especially after it refused to remove the judge in charge of the appeals. The next hearing session is scheduled for 7 June 2016. The re-trial does not however change the situation in terms of international law since the journalists are detained for acts falling under their right to freedom of expression and that the violations of their rights have been grave and systematic since their arrests.

In the meantime, the journalists are still detained in Al Aqrab prison – the high-security section of Tora prison in Cairo – where they reported being subjected to ill-treatment by guards. In addition, they are detained in appalling conditions. Kept in overcrowd cells, forced to sleep in a cell infested with insects, with no toilets but a mere hole in the cell, and deprived of drinkable water, their health has consequently deteriorated. They have also been repeatedly denied the right to see a doctor. Finally, their relatives' visits are often banned by the guards for no reason.

Alkarama reiterates its calls to the Egyptian authorities to uphold their international obligations and to implement Opinion n°7/2016 of the WGAD. They should immediately release Messrs Abdullah Ahmed Mohammed Ismail Alfakharany, Samhy Mostafa Ahmed Abdulalim, Mohamed Mohamed Aladili, Ahmed Sabii, Youssouf Talat Mahmoud Mahmoud Abdulkarim, Hani Salheddin, Mosaad Albarbary, Abdo Dasouki and Waleed Abdulraoof Shalaby and grant them their enforceable right to compensation for the time they have spent in arbitrary detention and for the torture and ill-treatment they have been subjected to.