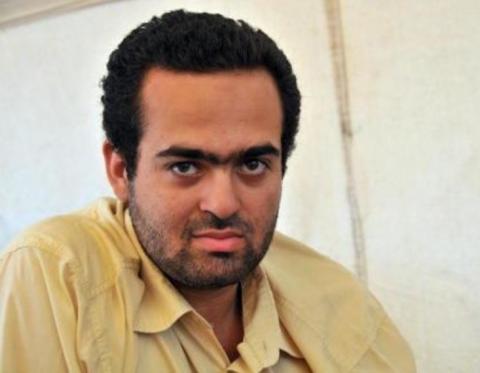 Update: Mohamed Adel was transferred to Mansoura Prison on July 3, 2018. Since then, he has been denied visits from his family and his lawyer. Adel is currently under investigation by the Sherbin Prosecution in relation to a new case, the circumstances of which remain unknown.

(Geneva, June 25, 2018) – On June 22, 2018, Alkarama requested the intervention of several UN Special Procedures in the case of Mohamed Adel, an Egyptian activist who was arrested on June 18 and subsequently detained pending an investigation over allegations of “spreading false information” and “attempting to harm state institutions”.

Adel – the co-founder of the April 6 Youth Movement – was previously imprisoned for three years after taking part in a peaceful protest against military trials for civilians on November 26, 2013, during which the police violently dispersed demonstrators and arrested approximately 50 activists.

Along with his April 6 Youth Movement co-founder, Ahmed Maher Ibrahim Tantawy, and blogger and activist, Ahmed Saad Douma Saad, on December 5, 2013, Adel was charged with participating in an unauthorised protest, disturbing public order, and assaulting police officers. He was sentenced to three years in prison and hard labour on December 22, along with a three-year probation period after serving his term and a fine of 50,000 Egyptian Pounds.

Furthermore, on April 28, 2014, the Abdeen Court for Urgent Matters banned the April 6 Youth Movement for damaging the image of the state, conspiring against the national interests of Egypt, and making illegal contacts with foreigners.

Adel was released in January 2017 following a three-year detention which was recognised as arbitrary in an Opinion adopted by the UN Working Group on Arbitrary Detention (WGAD) on December 3, 2015.

Ever since his release, Adel has been required to spend every night at a police station from 6 p.m. to 6 a.m. as a measure of judicial control, which constitutes another form of arbitrary deprivation of his liberty. It was during this control measure that Adel was re-arrested at Aga police station on June 18, 2018.

When he noticed that his son had not returned home in the morning, Adel’s father went to Aga police station to enquire about his whereabouts. There, he was informed that Adel had been arrested, and that he was being held in the State Security building in the town of Mansoura, in the Dakahlia governorate, but he was not informed of the reason for his son’s arrest.

On June 19, the Dakahlia Prosecutor ordered Adel’s detention for 15 days pending investigations over allegations of “spreading false information” and “attempting to harm state institutions”, without specifying the nature of the alleged “false information”. The arrest is based on a legal complaint filed against Adel for criticising the Egyptian government on his private Facebook account.

On June 22, Alkarama requested the intervention of the UN Special Rapporteur on the rights to freedom of peaceful assembly and of association, as well as the Special Rapporteur on the promotion and protection of the right to freedom of opinion and expression and the Working Group on Arbitrary Detention, arguing that Adel’s current arrest and detention constitute an act of reprisal for his peaceful activism, as well as a clear breach of his rights to freedom of expression and of association.