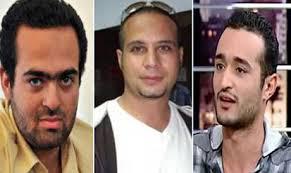 Ahmed Maher, Mohamed Adel and Ahmed Douma are amongst the first Egyptian activists to be convicted on the basis of the new restrictive assembly law n°107-2013. On 22 December 2013, they were sentenced by the Abdeen Misdemeanour Appeals Court to three years of imprisonment for having allegedly "demonstrated without permission" and "assaulting the police" and are currently being unlawfully detained in Tora Prison. On 17 April 2014, Alkarama requested the UN Working Group on arbitrary detention to issue an opinion as to the arbitrary nature of the three activists' detention and to request the Egyptian authorities to put an end to the widening crackdown against activists targeted only for having exercised their right to freedom of expression and assembly.

Ahmed Saad Douma Saad (أحمد سعد دومه سعد), 24, is a prominent blogger and activist from Cairo well-known since the Mubarak era. In 2009, Alkarama sent an urgent appeal to the Special Rapporteur on torture following his arrest and torture in Damahour prison. Since then, he has been arrested and tried a number of times due to his activism. Under Morsi's rule, he faced trial and prison for "insulting the President".

Ahmed Maher Ibrahim Tantawy (أحمد ماهر إبراهيم طنطاوي), 33, is a co-founder of the 6 April Youth Movement, a group of activists created in 2008 to support workers on strike. He was particularly active during the anti-Mubarak demonstrations in 2011 and was nominated for the Peace Nobel Prize.

The Demonstration before the Shura Council and the new anti-protest law
On 27 November 2013, Ahmed Douma, Ahmed Maher and Mohamed Adel joined the gathering organised by members of the "No Military Trials for Civilians" group in front of Egypt's Shura Council, the upper house of Parliament, to protest against the inclusion of military trials in the draft Constitution, which was finally approved on 18 January. The police violently dispersed the peaceful demonstration and arrested about 50 activists.

This protest was the first to be held after the issue of the restrictive "Law on the Right to Public Meetings, Processions and Peaceful Demonstrations" n° 107-2013 issued by Interim President Adly Mansour on 25 November 2013 , which places draconian restrictions on the right to freedom of assembly and expression.

Adopted only ten days after the lifting of the state of emergency, the assembly law constitutes a tool to further the crackdown on peaceful demonstrators and any voice of dissent against the military takeover. Its article 7 prohibits participants in public assemblies from conduct that would constitute a "threat to security and public order", "disrupt the interests of citizens" or "obstruct the course of justice", which are very vague charges. Based on article 19, any violation of this ban is punishable by two to five years of imprisonment. Moreover, sit-ins are prohibited (article 14), which demonstrates that the law does not take into account the notion of peacefulness of assemblies and security forces can resort to the use of force (article 13), "by means proportional to the extent of the danger posed to lives, capital or property", thus legalising the use of violence against peaceful demonstrators. Finally, the law requires protest organisers to seek authorisation three days ahead of any planned demonstration (article 8), which can be banned by the Ministry of Interior if deemed a "threat to peace and security" (article 10). It imposes jail terms and fines on individuals who break the law.

The arrest, sentence and detention

On 30 November 2013, Ahmed Maher, accompanied by Ahmed Douma, went before the Abdeen Courthouse to turn himself in as he learnt that he was being sought by the police for having 'incited' people to demonstrate on 27 November . After they entered the court house, the police violently attacked peaceful supporters who had gathered in front of Abdeen Court to escort him. Ahmed Maher was released the next day but summoned back on Monday 2 December at Zeinhom Court where he was interrogated without the presence of his lawyer, for having taken part in an 'unauthorised protest' – the spontaneous gathering before Abdeen Court house. The Public Prosecutor ordered his placement in pre-trial detention for four days. He was subsequently transferred to Tora Prison where he was detained in solitary confinement.

On 3 December 2013, Ahmed Douma was arrested at his home without an arrest warrant. He was then brought to Al Basateen police station, before being taken to Zeinhom Court whose Prosecutor also ordered placement in pre-trial detention for four days for alleged "resistance to authorities" and "vandalism in front of Abdeen Court". He was then transferred to Tora Prison where he also was kept in solitary confinement. Charged with "taking part to an unauthorised protest", "disturbing public order" and "assaulting police officers" on 5 December, Maher, Adel and Douma were summoned to appear on 8 December before the Abdeen Misdemeanor Court, which sat at the Tora Police Academy. The Court also ordered that Mohamed Adel Fahmi be apprehended.

During the 8 December hearing, the three men were tried on counts of "co-organising a protest without prior notice" and "attacking the security forces". The Prosecution requested that the maximum sentence be issued against the defendants. Furthermore, only Prosecution witnesses were called to testify, in particular three police officers who did not fail to mention that they were "attacked" by the three defendants who denied those allegations and affirmed that they were only peacefully demonstrating and were being tried only on the basis of political motives.

Absent during the hearings, Mohamed Fahmi was violently arrested on 18 December 2013, during a raid of the National Security Agency (administered by the Ministry of Interior) officers and policemen on the Egyptian Centre for Economic and Social Rights (ECESR), where he works, along with five other colleagues.

The six of them were blindfolded and brought to an unknown location where they were forced to stand for nine hours. The following day, five among those arrested were released, but Mr Adel remained detained incommunicado for four entire days until the day of the judgment on 22 December 2013.

The first instance judgment
On 22 December, Ahmed Maher, Ahmed Douma and Mohamed Adel were sentenced all together by the Abdeen Misdemeanor Court to three years of imprisonment with hard labour, a three-year probation period after serving their terms, and a fine of 50'000 EGP (7'000 USD) for "taking part in an unauthorised protest", "attacking security forces" and "disturbing public order". They were then taken to Tora Prison where they began a hunger strike on 26 December to protest against their condemnation for having peacefully demonstrated and to denounce their inhumane conditions of detention in solitary confinement.

The appeal
After lodging an appeal, they were again referred to the Abdeen Misdemeanour Appeals Court, which sits at the Tora Police Academy (southern Cairo), on 10 March 2014.
The three men were severely beaten up and threatened by security guards inside the Court building before entering the courtroom. Mohamed Adel and Mohamed Douma showed marks of beatings on their hands, legs and stomachs to the judges who refused, despite the lawyers' requests that they be referred to forensic doctors for examination.

On 7 April 2014, the Court, sitting at the Tora Police Academy (under the Ministry of Interior's authority) upheld the first instance's judgment and condemned the three men to three years of imprisonment with hard labour and a fine of 50'000 EGP. Afterwards, they were sent back to Tora Prison where they remain detained to date.

The call to the UN
On 17 April 2014, Alkarama requested the UN Working Group on arbitrary detention to issue an opinion as to the arbitrary nature of the three activists' detention and ask the Egyptian authorities to put an end the crackdown on activists based on the new assembly law and release all persons currently detained for having exercised their right of peaceful assembly and expression.