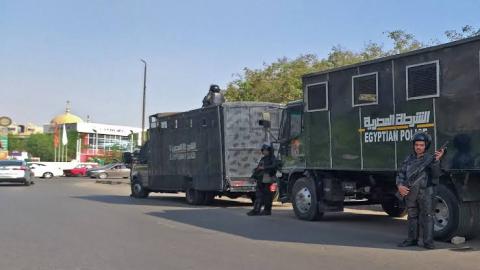 A UN expert has deplored the continuing large-scale arrests and prolonged pre-trial detentions of human rights defenders in Egypt, claiming that activists are being held without arrest warrants, held incommunicado and then charged with multiple spurious crimes.
of multiple spurious crimes.
"The exercise of the right to freedom of expression, association or peaceful assembly is not a crime," said Mary Lawlor, UN Special Rapporteur on the situation of human rights defenders. "Everyone has the right to promote and protect human rights. There is no justification for the actions of the Egyptian authorities against human rights defenders.
Violations of civil and political rights in Egypt have been one of Alkarama's main concerns for the past decade and a half, but the pace of repression and abuse has intensified since General Abdel Fattah Al-Sissi came to power following the military coup of 3 July 2013.
The Special Rapporteur had previously expressed her dissatisfaction in January 2021 with "the misuse of anti-terrorism and national security laws to criminalise the work of human rights defenders in the country".
The UN expert condemned the arrest of human rights defenders and bloggers, prolonged pre-trial detentions and charges of belonging to a terrorist organisation, as well as Egypt's continued practice of intimidation and criminalisation of human rights defenders, journalists and their families.
"Since then, more defenders have been remanded in custody pending investigation for offences under these provisions, which carry severe penalties," said Mary Lawlor in her recent statement, adding that "many victims are still being held in deplorable conditions, with serious negative consequences for their physical and mental health."

Alkarama's work
Over the past ten years, Alkarama has monitored the alarming and appalling deterioration of the human rights situation in Egypt, submitted dozens of individual complaints to the UN human rights special procedures and submitted reports to the Universal Periodic Review on the human rights situation in the country.
For example, on 28 March 2019, Alkarama submitted its shadow report to the UN Human Rights Council, highlighting the systematic practice of arbitrary detention and torture, and highlighting the prevalence of the crime of enforced disappearance, as well as the vague and flawed 2015 anti-terrorism law that was enacted for the systematic repression of human rights activists, journalists and peaceful dissidents. Alkarama also raised concerns about the use of the death penalty as a means of repressing dissenting voices and those exercising their fundamental right to freedom of expression, as well as the lack of ratification of core human rights instruments and reprisals against those who cooperate with UN human rights mechanisms
In its report, Alkarama expressed concern that Egypt has not ratified the International Convention for the Protection of All Persons from Enforced Disappearance, the Optional Protocols to the International Covenant on Civil and Political Rights which allow for individual complaints to the Human Rights Committee, and abolish the death penalty. Egypt has also not ratified the Optional Protocol to the Convention against Torture establishing a national preventive mechanism, nor the Rome Statute of the International Criminal Court.
Furthermore, the report warns of government intimidation and reprisals against activists, journalists, lawyers and individuals cooperating with UN experts.

Long pre-trial detention and false accusations
Alkarama has repeatedly expressed concern about the continued prolonged pre-trial detention, as well as the criminalisation of the right to freedom of expression, opinion and peaceful assembly, through unfair trials, which Lawlor highlighted, noting that this is a common trend with many Egyptian governments, where human rights defenders are arrested without a court order, held incommunicado in an unknown location and subjected to enforced disappearance, before being referred to the Supreme State Security Prosecution, followed by an order to detain them pending trial for alleged acts criminalised under vague provisions of the Penal Code, the Anti-Terrorism Law and the Cybercrime Law.
Special Rapporteur Lawlor pointed out that human rights defenders are at high risk of being prosecuted for alleged offences under the same legislation - a practice that is particularly common in cases where human rights defenders have been ordered released by the courts. She said: "This practice of placing human rights defenders on several spurious cases, in some cases in parallel, represents Egypt's blatant disregard for its international human rights obligations to which it is a signatory. It is a chilling practice designed to prevent defenders from promoting human rights in the country.