Egypt: New Report Shows Cases of Death in Detention more than Trebled in Past 2 Years 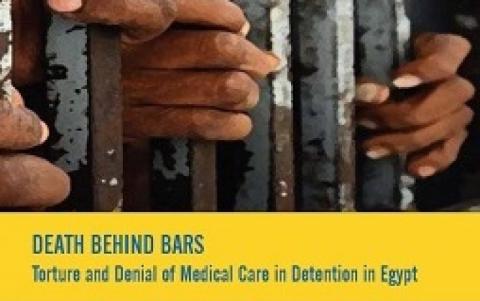 Alkarama's report documents hundreds of cases of death in detention resulting from torture, denial of medical care and poor conditions of detention.

Less than two weeks after the Egyptian authorities adopted a new law giving prison personnel the right to torture and ill-treat prisoners while restricting even further the rights of Egyptian detainees, Alkarama publishes a new report that documents 323 cases of death that occurred in Egyptian detention facilities between August 2013 and September 2015 as a direct consequence of torture, ill-treatment or denial of medical care. All result from widespread and systematic violations of Egypt's international obligations. The report investigates the causes of these deaths and suggests a way to put an end to this worsening situation by providing effective recommendations to the Egyptian authorities and the international community.

"What the report reveals is that deaths in detention in Egypt are not an isolated phenomenon that would occur as the result of a natural process. It shows that these hundreds of deaths have been caused by the Egyptian authorities' behaviour and legislation in force. These individuals died because detainees lack sufficient protection of their right to life and to be free from torture in detention," said Thomas-John Guinard, Legal Officer for the Nile region at Alkarama. "With this documentation and legal analysis, the Egyptian authorities now have the tools, if not the will, to resolve this dramatic issue."

"Death Behind Bars: Torture and Denial of Medical Care in Detention in Egypt" details two years of violations in Egyptian detention facilities that saw the death of men, women and children aged between 15 to 76. Based on first-hand information and other civil society and media reports, Alkarama's report provides a thorough observation of the situation in prisons, police stations and other detention facilities across the country together with detailed accounts of torture and denial of medical care. By analysing the current legislation on the treatment of prisoners, it tries to explain how, in just two years, over 300 individuals died in various detention facilities across Egypt.

"The report's finding are unequivocal in the sense that if Egypt keeps this legal framework and does not adopt new procedures regarding condition of detention, the situation can and will only deteriorate," said Rachid Mesli, Legal Director at Alkarama. "Reforms must be undertaken at the highest level and in a wide-ranging and inclusive manner, instead of adopting window-dressing measures that fail to comprehensively address issues and end up being counterproductive for detainees."

Hence, the report's conclusions contain numerous recommendations mainly to the Egyptian authorities but also to the international community regarding the various measures and actions that could be implemented to end the systematic violation of human rights in detention for these facilities to stop becoming official graves.