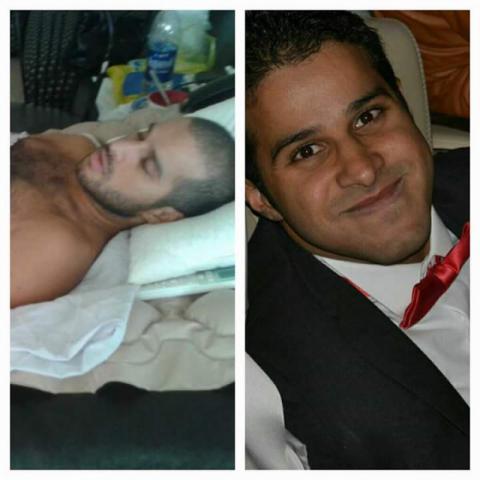 On 8 July 2016, Alkarama referred to the United Nations Special Rapporteur on the Right to Health (SRH) the case of Mahmoud Hassan Sabry, who was arrested on 29 July 2015 in Cairo by Egyptian Homeland Security Forces and thrown from his apartment's balcony for allegedly having participated to "violent demonstrations", causing him severe body injuries and a partial paralysis. Detained ever since, he is denied access to adequate medical care and his life remains at risk, despite his family's appeals and attempts at soliciting the intervention of local authorities.

Mahmoud Hassan Sabry, a 29 year-old real estate agent from Cairo, was arrested on 29 July 2015 when Egyptian Homeland Security members stormed his house. After verbally assaulting, threatening him, and pillaging their property, they threw Sabry from his balcony, located on the 3rd floor, with his hands and feet shackled, causing him serious body injuries along with a partial paralysis. He was then transferred to Heliopolis hospital where he was held for six months under the accusation "participation to violent demonstration", and finally to Tora prison on 23 January 2016. Denied medical treatment since, his doctor informed Sabry's family that his life was at serious risk as a result of the lack of a thorough medical follow-up and denial of surgical interventions.

His relatives took several steps requesting his release at the level of the Prisons' Sector, belonging to the Egyptian Ministry of Interior, at Cairo's General Prosecution and at the Egyptian National Council for Human Rights, without tangible results so far. They therefore remain deeply concerned over Sabry's health conditions and fear for his life.

Although he was later acquitted from the first charge of "participation to violent demonstration", Sabry was informed that a second unknown indictment was issued against him by a military court, which however did not disclose the nature of the accusations. His lawyer was also denied access to his judicial file.

"Such an excessive use of violence during arrests conducted by Egyptian security forces constitutes a pattern in Egypt, particularly against peaceful demonstrators accused of 'violence' and of having breached Law n°107 of November 2013 on the Right to Public Meetings, Processions and Peaceful Demonstrations," says Simone Di Stefano, Regional Legal Officer for the Nile at Alkarama. "Systematic denial of medical care in detention is also recurrent in Egyptian prisons, as reported by Alkarama in its November 2015 public report which documented more than 300 deaths in detention as a result of denial of medical treatment."

Alkarama sent an urgent appeal to the United Nations Special Rapporteur on the Right to Health (SRH) to ask the Egyptian authorities to guarantee his mental and physical health, to provide him with access to medical care, and to possibly release him so that he can benefit from appropriate medical treatment.