Egypt: The life of imprisoned photographer and journalist, Alia Awad, is in danger 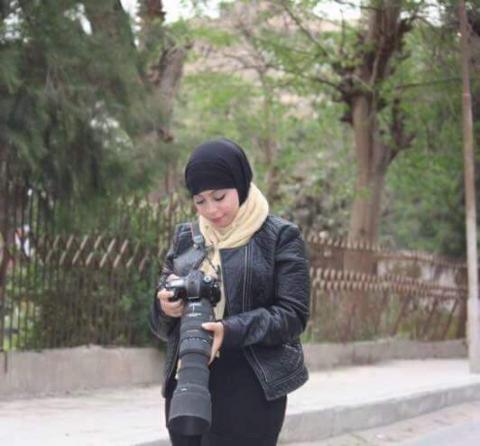 Alia Awad, an Egyptian photographer and journalist, who has been detained in prison for nearly five years, and has been banned from visits for nearly a year, faces imminent risks during her detention due to medical negligence as a result of a uterine tumor and other illnesses that have resulted in a serious deterioration of her health.
Alkarama expresses its grave concern about the fate of Alia and other detainees in Egyptian prisons, and urges the Egyptian government to assume its responsibilities under international human rights law and put an end to the suffering of thousands of political prisoners, including human rights defenders and journalists.

Alkarama's activity
It is worth noting that on 12 July 2018, Alkarama wrote to United Nations Special Procedures (*), asking them to intervene in the case of the photographer-journalist Alia Awad, who was arrested on 23 October 2017, for covering the news of terrorism-related events and is currently detained in Al-Qanater prison.
Ms. Awad is one of many journalists in Egypt who have been punished under the 2015 anti-terrorism law for simply doing their job.  This law criminalizes any coverage of terrorist attacks or counter-terrorism operations in the country that are deemed inconsistent with the government's narrative.
This is the second time the 35-year-old journalist has been arbitrarily arrested for her activism.  Ms. Awad was previously arrested on September 3, 2014 by the National Security Forces for recording a videotape in which masked members of the "Helwan Brigades" announced their intention to target police facilities in the Helwan area, south of Cairo. After her abduction, she was forcibly disappeared for a month and was forced under torture to confess to filming and publishing the video because she "sympathized with the Muslim Brotherhood."
On October 3, 2014, Awad was spotted at the National Security Forces headquarters by lawyers who informed her family of her whereabouts.
As one of 150 defendants who were tried in the mass trial known as the "Helwan Brigades" case on February 19, 2015, Ms. Awad was charged with "joining a group formed in violation of the provisions of the law," "publishing for the purpose of promoting the group," and "participating in a gathering with the aim of sabotaging it."  Ms. Awad was released on March 28, 2016 due to health problems, although she was not acquitted of the charges.
Ms. Awad was arrested for the second time on October 23, 2017 at the Cairo Criminal Court located at the Institute of Police Commissioners in Tora, after being summoned to a hearing in the "Helwan Brigades" case by the State Security Prosecution. She was forcibly disappeared until October 28, 2017, when her family was informed by security officers that she was detained at the Helwan police station, from which they were able to visit her weekly.  On January 29, 2018, she was transferred to al-Qanater prison, where she is currently being held.
During her detention, Ms. Awad's health deteriorated significantly.  After a medical examination, doctors discovered benign tumors in her uterus, and the administration of al-Qanater prison decided to perform a hysterectomy, despite her refusal to give her consent for the operation.  On June 30, 2018, Ms. Awad underwent an operation at Qasr al-Aini Government Hospital, during which the doctors only removed uterine tumors, without performing a forced hysterectomy on her. Four days after the surgery, she was transferred to Qanater prison, where the prison administration monitors her treatment, but at the same time exposes her to psychological abuse.
On 12 July 2018, Alkarama made an urgent appeal to the UN Special Procedures, as Ms. Awad's rights to freedom of expression, liberty, security, health, and reproductive rights have been violated by the Egyptian authorities.

Alkarama has requested the intervention of UN experts to call on the Egyptian authorities to immediately release Alia Awad and drop all charges against her, and to provide her with at least appropriate treatment.  Alkarama also asked the Special Procedures to call on the Egyptian authorities to protect their citizens' right to freedom of expression and to stop using anti-terrorism legislation to prosecute journalists for simply covering anti-terrorism cases.