Egypt: Extrajudicial execution of individuals in detention during a counter-terrorism operation 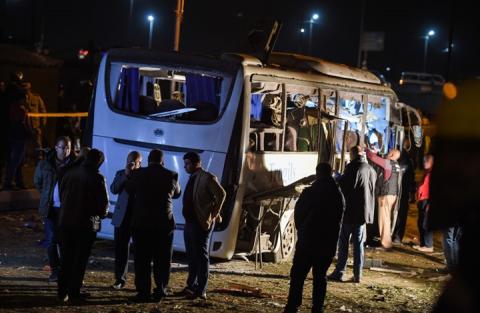 On 31 January 2019 Alkarama sent a communication to the Special Rapporteur on extrajudicial, summary or arbitrary executions to call on the Egyptian authorities to publicly release the names of all those killed during the 30 December 2018 operation presented as counter-terrorism by the authorities as a response to the terrorist attack of 29 December 2018 in Giza against a tourist bus. After having carried out an investigation into the circumstances surrounding the operations as well as the individuals who were killed and presented as terrorists by the state security, Alkarama submitted that several persons killed during the operation were in fact secretly detained.

“To date, no list of names of the individuals killed in the raid has been released by the authorities” declared Rachid Mesli, Alkarama’s legal director, “we fear that given documented precedents of extrajudicial executions during counter-terrorism operations in Egypt in the past years, several – if not all – victims were in fact secretly detained”.

On Friday 29 December 2018, at about 18:15 local time, a bomb exploded on Maryoutiya Street in Giza's Haram district while a bus carrying 14 Vietnamese tourists was passing. three tourists and an Egyptian tour guide killed and 10 other wounded including the bus driver. The very next day following the attack, on 30 December 2018 the authorities officially announced that two raids were carried out in two different sites on the outskirts of Giza – which killed 30 persons, as well as another location in Arish, North Sinai – which killed 10 more persons in what was officially presented as shootouts. All the individuals killed were presented by the authorities and some media outlets as “terrorist suspects” in hiding.

While the official announcement did not explicitly refer to the terrorist attack, the raid was however presented by the authorities as a strong response to the attack as well as previous ones. In its statement, the ministry said in a statement that security forces had learned that “a number of terrorists” had “planned a series of attacks that targets state institutions, tourism, armed forces, police, and Christian places of worship.” The ministry of interior also released photos of the dead with their faces blurred and weapons lying beside them.

Since 2013, Egypt’s military and police forces have been waging a series of operations presented as “counter-terrorism” during which civilians were executed by armed forces, particularly in the Sinai Peninsula as well as areas in the south of the country and near the border with Libya.

In the past, Alkarama has documented cases that follow the same alarming pattern of execution of victims of enforced disappearance to different mandate holder. The same allegations were made by Human Rights Watch which stated in March 2017 that Egyptian security forces may have arbitrarily detained and forcibly disappeared the men and then staged a counterterrorism raid to cover up the killings in a campaign in the Sinai Peninsula against an affiliate of the Islamic State in January 2017. Their investigation suggests “that police arrested at least some of the men months before the alleged gunfight at a house in North Sinai and that the raid itself was staged”.

Alkarama received several testimonies of families of victims of enforced disappearance who reported that they recognised their relative among the individuals killed during the 30 December 2018 raid.

Several individuals were detained in Scorpio prison and were denied contact with the outside world. The day after the operation, their relatives found out about their death as their names were amongst the few ones released by the media. While the authorities released pictures of the deceased, no list of individual has been made public and families who recognised their relative have not been informed of the whereabouts of their bodies.

After an inquiry and in light of the refusal of the authorities to disclose a full list of names of the individuals killed during the raid and given the precedent use of counter-terrorism operations to execute prisoners and victims of enforced disappearance, Alkarama requested the expert to urge the Egyptian authorities to disclose the names of those who were killed during the operation and launch an independent investigation.