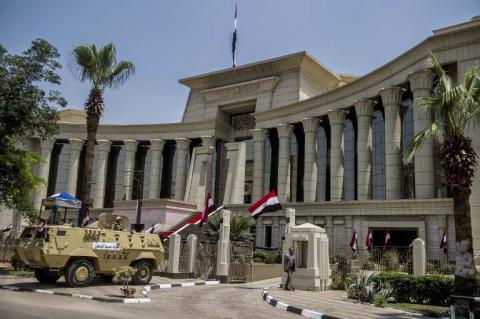 On 19 June 2017, the High Military Court upheld on appeal the death sentence of seven men in the Kafr Al Sheikh Stadium bombing case. The men had been sentenced to the capital punishment in 2016 following a flawed trial solely based on statements obtained under brutal torture and testimonies of State Security officers. Should their sentence be carried out, their executions would be summary and constitute a severe violation of Egypt’s human rights obligations.

On 15 April 2015, a bomb exploded in a room adjacent to Kafr Al Sheikh Sports Stadium, killing three Military College students and injuring two others. Immediately following this attack, nine individuals were violently abducted by the State Security Police and held in secret. Their interrogation took the form of brutal and lengthy sessions of torture to make them confess to the bombing.

The authorities charged seven of them with “organising and carrying the explosion”, “murder” and “belonging to a banned group”. It was solely on the basis on these forced confessions that on 1 February 2016, the Military Court sentenced them collectively to death; the military judge remained deaf to their pleadings and claims of their innocence. Among them were 23-year-old Lotfy Ibrahim Ismail Khalil, 28-year-old Ahmed Abdul Hadi Al Seheemy, 32-year-old Sameh Abdullah Mohamed Youssef and 42-year-old Ahmed Abd Al Moenem Salama Ahmed Salama. Three others were sentenced in absentia. On 19 June 2017, the High Military Court upheld their sentences on appeal.

From the onset of their arrests, all men were subjected to the same gruesome torture techniques that are used by Egyptian security forces in similar cases. After having been abducted they were kept in secret detention for long periods of time ranging from 70 to 90 days during which they were suspended by the wrists, blindfolded for prolonged hours, beaten, electrocuted on sensitive parts of their bodies, assaulted and told that if they did not sign the statements their female relatives would be raped.

During these 70 to 90 days, their families were trying to find out why and where they were detained: they knocked at the doors of several police stations, only to be faced with a constant denial of their arrest by the authorities. This situation, qualified in international law as an enforced disappearance, has also been considered by UN experts as a form of torture and cruel treatment not only against the victims, but also against their families.

After they signed self-incriminating statements, they were brought before a military judge without a lawyer. Dates of arrest were falsified by the investigators in order to cover up the prolonged periods of secret detention, as usually practiced in Egypt. In the official case file, 23-year-old Lotfy and 42-year-old Ahmed were said to have been arrested on 30 June and 1 July 2015 respectively, whereas they had been disappeared since 19 April 2015.

The trial was heavily flawed: not only the only evidence against them were their coerced statements but they were denied the right to provide exculpatory evidence to prove their innocence. Although the defendants contested the statements and the forensic reports clearly stating the accounts of torture, both the Military Court and the High Military Court  ignored their allegations and failed to open an investigation. In each instance, the judges decided to base their decision on the defendants’ self-incriminating statements, in clear violation of Egypt’s obligations under the UN Convention against Torture, to which the country is a party since 1986.

“On 25 February 2015, the African Commission on Human and Peoples' Rights issued measures urging the Egyptian authorities to suspend the execution of the seven men and ordered a retrial before a civilian court that observes guarantees of fair trial,” said their lawyer Dalia Lotfy. “Once again, Egypt failed to implement the decision issued by the Commission and disregarded the Principles and Guidelines on the Right to a Fair Trial and Legal Assistance in Africa stipulating Military courts should not in any circumstances whatsoever have jurisdiction over civilians,’’ she added.

“Hundreds of civilians are regularly tried by military courts in Egypt, with these courts often failing to respect the basic and fundamental guarantees of independence and impartiality, essential to a fair trial,” said Radidja Nemar, Legal Officer at Alkarama. “It is time for the Egyptian authorities to understand that such courts should not have jurisdiction over civilians and should abstain from imposing the death penalty,” she added.

To date, the victims are still detained in different locations in appalling conditions, denied medical care, and for some of them, denied family visits. On behalf of their families, Alkarama submitted an urgent appeal to the United Nations' Special Rapporteur on extrajudicial, summary or arbitrary executions (SRSUMX) requesting the independent expert to urge the Egyptian authorities to revoke these death sentences and to investigate their allegations of torture.