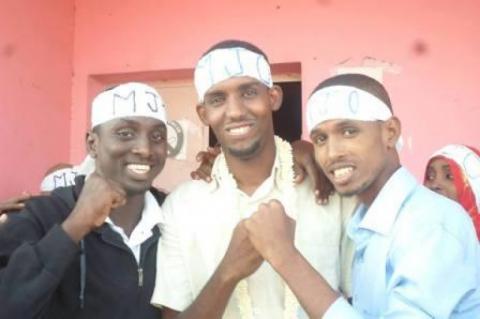 Alkarama welcomes the release, on 21 December 2014, of Mouhayadine Yacin Mohamed and Said Charmake Darar, President and Spokesperson of the Mouvement des Jeunes de l'Opposition (MJO), for which Alkarama had sent an urgent appeal to the United Nations Working Group on Arbitrary Detention (WGAD) on 12 December 2014.

Mohamed and Darar had been arrested on 8 December 2014 at their respective homes in the neighbourhood of Balbala, a southern suburb of Djibouti City, violently beaten with rifle butts, and taken to the police station in the 4th district of Balbala, where they had been kept in particularly harsh conditions and without access to their lawyer and President of the Djiboutian League of Human Rights, Zakaria Ali Abdillahi.

Later, and still in the absence of their lawyer, they had been indicted by the Prosecutor of the Djibouti Court for "illegal demonstration", "disturbing public order" and "violence and degradation", charges they denied since the alleged event never took place. They had not even been authorised to see a doctor despite the signs of serious bruising on their bodies.

Finally, they had been placed in custody at the Gabode prison, known as a lawless zone where torture is commonly practiced and famous for its appalling detention conditions. On 14 December 2014, when they had appeared in court, their lawyer had obtained Mohamed's provisional release, but not that of Darar, who had been sent back to prison. It was thus with a huge sense of relief that Alkarama learned that the two young people had been released and that the charges against them had been dropped, demonstrating the political nature of their arrests.

Despite these two releases, Alkarama reiterates its call to the Djibouti authorities to end the harassment and arbitrary detention of political opponents and human rights defenders, and to ensure the political diversity necessary for the establishment of a democratic regime as well as a space for civil society in the promotion and protection of human rights in the country. In this sense, Djibouti should immediately implement the recommendations provided by the United Nations Human Rights Committee in 2013.