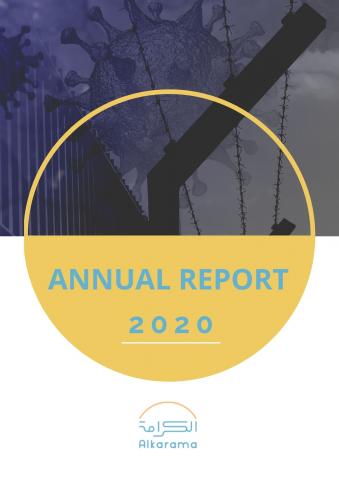 Alkarama, based in Geneva has launched its annual report 2020. It addresses issues related to the human rights situation in the Arab region, in light of the COVID-19 pandemic, as well as the continuing pace of repression, in a climate of impunity and armed conflicts.
The report sheds light on Alkarama's activity in 20 countries, and highlights the situation of human rights in each country. During the year 2020, Alkarama continued its work to address legally, through the United Nations mechanisms, violations that occurred in these countries whenever it has been mandated to do so by families of the victims.
In this context, Alkarama's legal director, Lawyer Rachid Mesli, says: “The world lived this year on the impact of an unprecedented health crisis caused by the Coronavirus (COVID-19) pandemic. The corruption of governments and their disregard for the basic rights of their citizens have exacerbated the impact of the health crisis on Arab society,” adding that  “The pandemic has shown more than ever that political accountability and the rule of law are fundamental to accessing civil and political rights and basic services, such as adequate health care, but despite this, governments' inability to provide adequate prevention and treatment has been accompanied by the arrest of those who publicly denounced it.”
According to the report, "the most disturbing is the use of the epidemic as another excuse to unnecessarily restrict basic rights and guarantees, especially against individuals deprived of their freedom", as Arab countries from Saudi Arabia to Egypt used the epidemic to deny political detainees any contact with the outside world.
Meanwhile, calls for real peace processes and investigations by UN experts remain unheard of by states in war-torn countries, such as Yemen, Syria and Palestine.
Despite the dire humanitarian and human rights situation across the region, civil society has continued relentlessly to denounce the grievances and challenge the despondency that authoritarian regimes try to impose with violence.
Alkarama believes more than ever in its mission to support individuals, without discrimination, in claiming their inalienable rights and respecting their dignity.
The march towards greater freedom and legal accountability may suffer setbacks; But the wheel of struggle must continue. Thus, over the past year, and indeed for a decade, Alkarama has stood witness to the resilience and despondency of those who, throughout our Arab region, are challenging the state of despondency that tyrannical regimes are trying to impose with violence on their societies.
Over the years and despite the crises we have faced, we remain steadfast in our commitment to support the struggle against injustice in the Arab world, with the hope of continuing along this path in the coming years. We are grateful to all of those who have remained standing with us in this struggle, especially the independent United Nations experts. We are grateful to all the human rights defenders in the region who helped us advance our mission, despite the risks they face. This report is recognized for their struggle.

About Alkarama
Alkarama is a Geneva-based non-governmental human rights organisation established in 2004 to assist all those in the Arab world subjected to or at risk of extrajudicial execution, enforced disappearance, torture, and arbitrary detention. Acting as a bridge between individual victims and international human rights mechanisms, Alkarama works towards an Arab world where all individuals live in freedom and dignity, and are protected by the rule of law.
To end these violations, Alkarama cooperates with local and national civil society actors, international organisations for the promotion and protection of human rights, as well as governments and other entities likely to act on the human rights situation.
Alkarama works for a strong global coordination for the protection of human rights, and for the strengthening of regional, national and local protection agencies. It also contributes to filling the information vacuum in order to attract the attention of the relevant international mechanisms regarding the violations occurring in the Arab world. It also encourages governments to strengthen their legislation to defend and promote human rights.
Alkarama also contributes to spreading the culture of human rights, by working to educate the various components of civil society in these countries about this concept to circumvent it, know their rights and demand them, and feel the protection of the law.

To view the Alkarama Annual Report 2020: