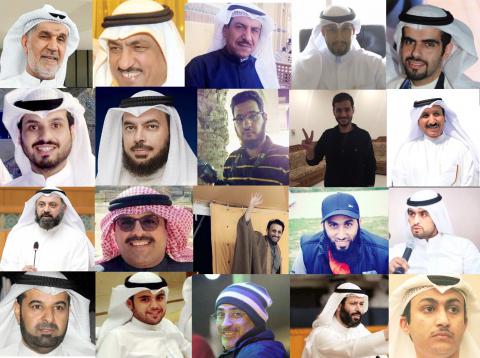 Geneva, February 16, 2018 -- On February 12, 2018, Alkarama sent an urgent appeal to the United Nations Special Rapporteur on the promotion and protection of the right to freedom of opinion and expression, David Kaye, ahead of the upcoming appeal of 67 opposition activists and members of parliament sentenced in the well-known “Entering the National Assembly (دخول المجلس)” case.

The appeal, which will be heard before the Court of Cassation on February 18, 2018, comes after the activists and MPs were sentenced to between one and nine years’ imprisonment on November 27, 2017 for entering the National Assembly building during a peaceful protest against corruption in 2011.

On behalf of 20 of the activists and MPs, Alkarama requested the urgent intervention of the Special Rapporteur to call upon the Kuwaiti authorities to acquit them of all charges and release them immediately, while expressing its concern over the increasing restrictions on the peaceful expression of dissent in the country.

Peaceful demonstration against corruption in 2011

In November 2011, a corruption scandal surfaced in Kuwait, implicating high-ranking government officials, politicians and parliamentarians. On November 16, 2011, after the parliament blocked a request to launch an investigation into these allegations, hundreds of Kuwaitis held a sit-in protest in front of the National Assembly building, and later attempted to march towards the Prime Minister’s residence, demanding his resignation.

As the police arrived with batons to block the march and disperse the demonstrations, dozens of protestors – including former and current MPs – sought shelter inside the National Assembly building. The demonstrators entered the main hall, chanted the national anthem and left the building shortly after.

A few days after the incident, 70 demonstrators were summoned by the Public Prosecution and charged with “entry into a state property to commit the crime of unlawful assembly,” among other charges. On December 9, 2013, the defendants were acquitted of all charges by the court of first instance, which found that there was no evidence to prove any “criminal intent”, and that the protesters’ acts were related to the peaceful exercise of their right to freedom of opinion.

On November 27, 2017, this judgement was overturned by the Court of Appeal, which sentenced 67 defendants to prison terms ranging from one to nine years following an unfair mass trial. Most of the accused were immediately arrested and brought to the Kuwaiti Central Prison, although the final ruling is still pending in front of the Court of Cassation, which will begin its review on February 18.

Crackdown on rights to freedom of peaceful assembly and expression

The Court of Appeal based its judgement on repressive legislation including the Law on Public Meetings and Gatherings, which provides for harsh prison terms against anyone who “supports”, “incites” or “takes part” in unauthorised assemblies. These charges are in clear violation of international standards, according to which the right to peaceful assembly must be respected, generally requiring prior notification rather than authorisation. In its 2016 concluding observations, the United Nations Human Rights Committee (HRCttee) expressed concern over this law, criticising “the overly broad prohibition on public gatherings without the prior authorization of the Ministry of the Interior.”

Concerned over the Kuwaiti authorities’ violations of the activists and MPs’ fundamental freedoms and fair trial rights, Alkarama urged the Special Rapporteur to call on the authorities to release the group of protesters and ensure that the final ruling comply with international standards. Alkarama also requested that the Special Rapporteur urge the authorities to amend the Law on Public Meetings and Gatherings and other domestic legislation that infringes on fundamental rights and freedoms.

“We remain highly concerned by Kuwait’s increasing use of repressive legislation to curtail the exercise of the rights to freedom of expression and peaceful assembly,” said Julia Legner, Regional Legal Officer for the Gulf countries at Alkarama. “For a country like Kuwait, historically known for its independent parliament and respect for political liberties, a lot is at stake. The outcome of this case could be decisive as to whether these principles will remain a pillar of Kuwait’s identity in the future.”