Kuwait: Human Rights Committee Issues its Concluding Observations on the Situation of Civil and Political Rights in the Country 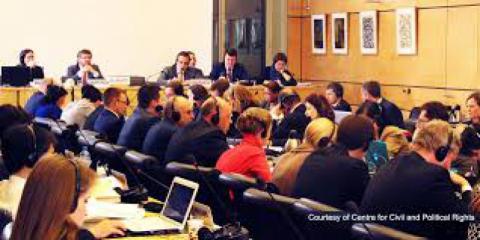 After reviewing Kuwait's third periodic report on 21 and 22 June 2016, on 15 July 2016, the Human Rights Committee (HRCtee)published its Concluding Observations on the human rights situation in the country and the State party's implementation of the International Covenant on Civil and Political Rights(ICCPR). The Committee's recommendations thoroughly reflect Alkarama's points of concern which it shared with the Committee's experts at the NGO briefing and which it highlighted in its shadow report presented to the Committee before the review.

Grave restrictions to the right of freedom of opinion and expression

In its Concluding Observations, the UN experts expressed concern over the recent closing of media outlets, the arrests of journalists and activists as well as the passing of new laws further curbing freedom of expression in Kuwait – such as the Cybercrimes Law or the Communications Act –, as highlighted by Alkarama in its shadow report. The Committee urged Kuwait to decriminalise defamation such as "insult to the Emir or other state authorities" and to repeal or revise laws containing provisions restricting the right to freedom of opinion and expression with a view to bringing them into conformity with the ICCPR. The Committee further asked that Kuwait guarantee media freedom and ensure that media can operate independently and free from government intervention and that decisions to suspend or close media outlets be made by an independent authority and be subject to judicial review. Finally, it called for the release and effective judicial redress of persons imprisoned for having merely expressed their opinion.

The Human Rights Committee urged Kuwait to amend its Nationality Law to ensure that the peaceful exercise of the right to freedom of opinion and expression, association and assembly can never be used as a ground for the revocation of citizenship. In its report, Alkarama had drawn the Committee's attention to the fact that the Kuwaiti authorities use citizenship stripping in a politically motivated manner to punish government critics in the kingdom. Indeed, Kuwait's Nationality Law allows for the revocation of citizenship for acts such as "threatening the higher interests of the State or its security".

In its Concluding Observations, the UN experts recommended that Kuwait ensure that the exercise of the right to peaceful assembly is not subject to restrictions other than the ones permissible under the Covenant. It further called on the State to investigate all allegations relating to the excessive use of force by security forces and ensure that the perpetrators are prosecuted. Amongst its most serious concerns, Alkarama had highlighted in its report the fact that Kuwaiti legislation bar non-citizens from participating in public gatherings and that gatherings, in general, are subjected to prior authorisation by the Ministry of Interior. Moreover, Alkarama raised the alarming issue of the excessive use of force witnessed in the dispersal of protests and demonstrations by the authorities since 2011.

In its shadow report, Alkarama outlined the plight of the Bidoon, a stateless community categorised by the State as "illegal residents", who, as such, are discriminated against and deprived of their most basic rights. While the Law on citizenship allows for Bidoons to acquire Kuwaiti citizenship, the Human Rights Committee expressed concerns over the fact that the procedure is especially slow and recommended that Kuwait speed up the process of granting Kuwaiti citizenship to the Bidoon, where appropriate. It also urged the State to guarantee the right of every child, including the Bidoon, to acquire a nationality; register and provide non-discriminatory access to social services to all Bidoon residing in Kuwait and ensure that they enjoy their right to freedom of movement, peaceful assembly, opinion and expression.

Compulsory DNA collection and restrictions to the right to privacy

As response to the deadly terrorist attack of 26 June 2015 against the Imam Sadiq mosque, which killed 27 people and wounded 227 in Kuwait-city, the Kuwaiti authorities passed Law No. 78/2015 on compulsory DNA collection for all Kuwaiti citizens and residents of the country. Highlighting the lack of accountability and independent control over the collection of DNA samples as well as the intrusion to the right to privacy, Alkarama expressed its concerns over the possible consequences and dangers of such a law. The Human Rights Committee, agreeing that such a law is in contradiction with the right to privacy enshrined in article 17 ICCPR, recommended that Kuwait limit DNA collection to individuals suspected of having committed serious crimes and on the basis of a court decision. It added that individuals should be able to challenge the State's request and further asked that an oversight mechanism, independent of the Ministry of Interior, be established to monitor the collection and use of DNA samples.

Kuwait lacks an inclusive political life. In fact, while different and opposing blocks exist in the national assembly, the formation of official political parties is still prohibited in the country. In response to this, the Committee recommended that Kuwait adopt a legal framework regulating the existence of political parties so as to enable them to participate effectively and formally in political life. Moreover, the Committee expressed its concerns about amendments issued in June 2016 of the electoral law, barring persons convicted of defamation or blasphemy from standing for elections, which will be the case for former parliamentarian Musallam Al Barrak, who in 2015 was sentenced to two years in prison on charges of "insult to the Emir".

Alkarama reminds the State party that in accordance with the Committee's rule of procedures, the State is requested to provide, within a year, information on the implementation of the Committee's most pressing recommendations, i.e. the rights of the Bidoon, the right to freedom of expression and the right to freedom of assembly. Alkarama further calls on the state to widely inform the public about the result of this consultation and the obligations stemming from the ICCPR. Alkarama intends to closely monitor the implementation of the Committee's recommendations in Kuwait and after one year provide a follow-up report to the Human Rights Committee. Hence, Alkarama calls on the Kuwaiti Civil Society for its collaboration and input.