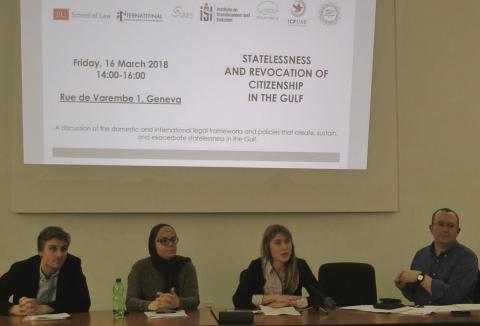 On March 16, 2018, as part of a larger Statelessness Committee of NGOs and academic partners, the Alkarama Foundation participated in a side event organised in the context of the 37th session of the Human Rights Council in Geneva to discuss the current situation of statelessness, restrictive nationality laws and the revocation of citizenship in the Gulf.

Opening the discussion, Zahra Albarazi of the Institute on Statelessness and Inclusion (ISI), explained that the Gulf has one of the largest stateless populations in the world relative to its own population. The reasons behind this include the failure of states to naturalise parts of their populations following the establishment of nation states in the region, as well as increasingly exclusive nationality laws – which are particularly discriminatory against women – and the growth in the number of states withdrawing nationality from their citizens.

Julia Legner – Regional Legal Officer for the Gulf at the Alkarama Foundation – focused on the longstanding issue of statelessness in Kuwait. She highlighted how, despite Kuwait being one of the richest countries in the world, the stateless population (known as the “Bidoon”) are often marginalised, deprived of their social, economic, civil and political rights, and denied access to basic services.

Legner shared the case of Ahmad Jaber, a Bidoon who was unable to pursue his academic career abroad – after being accepted by several prestigious universities in the U.K. and U.S.A. – because the Kuwaiti authorities confiscated his passport. She emphasised how difficult it is to raise such cases within the UN system, and encouraged a discussion on the options available to provide a remedy to stateless people in the Gulf.

Safwa Aïssa – Executive Director of the International Centre for Justice and Human Rights (ICJHR) – continued the discussion by focusing on the issue of statelessness in the United Arab Emirates (UAE). Aïssa analysed how Federal Law No. 16 of 2017 – amending several provisions of the Federal law No. 17 of 1972 on Nationality and Passports – contravenes international human rights standards.

Aïssa highlighted how this law is used to punish relatives of prisoners of conscience. She recalled the case of Mohammed Abdul Razzaq Siddiq, who was convicted in the “UAE 94” mass trial and whose nationality, along with that of his three children, had been revoked. Aïssa encouraged the UAE to abide by international law and to implement UPR recommendations.

Journalist and author Atossa Abrahamian raised the issue of the approximately 50,000 people carrying Comorian passports in the UAE as a result of a deal in which the UAE paid the Comoros 200 million USD in exchange for Comorian citizenship for 4000 stateless families. By making the Comorian passport a prerequisite to access basic services and renew documents, the Emirati authorities coerced the Bidoon into accepting the Comorian nationality.

Abrahamian stressed how this system of forced nationality turns the Bidoon into foreigners, thus putting them at risk of deportation, as in the case of the human rights defender Ahmed Abdul Khaleq. She expressed concern over the fact that this issue has not been raised by the United Nations, and encouraged increased international advocacy on the issue.

Joe Odell – Press Officer at the International Campaign for Freedom in the United Arab Emirates (ICFUAE) – discussed how the Emirati authorities are using the revocation of citizenship as a way of cracking down on dissent. This process is regulated by Law No. 17 of 1972 Concerning Nationality and Passports, in which a vague definition of “national security” allows for the withdrawal of citizenship from whoever opposes the authorities. Odell recommended that the UAE immediately ratify the two key international conventions on statelessness and amend Federal Law No. 17 of 1972 by removing provisions that allow for the arbitrary revocation of nationality.

Yoana Kuzmova and Jeiel Mensah from the International Human Rights Clinic at Boston University School of Law (IHRC) shared the experience of a client of the IHRC, highlighting the hardship and lack of fundamental rights faced by the stateless population.

Drewery Dyke, who moderated the event, continued the discussion by emphasising the fact that in Bahrain, the arbitrary deprivation of citizenship is a key tool to neutralise dissent. He affirmed that, since 2012, 578 individuals have had their citizenship withdrawn by the Bahraini authorities, as confirmed by Salam for Democracy through a video contribution.

At the end of the event, several panellists urged civil society members to come together and organise themselves in order to raise the issue of statelessness at the international level and to reach the communities affected by this issue around the globe.

The panel discussion “Statelessness and Revocation of Citizenship in the Gulf” can be viewed in full here.