Algeria: A Peaceful Protest of Families of the Disappeared Algeria Violently Repressed 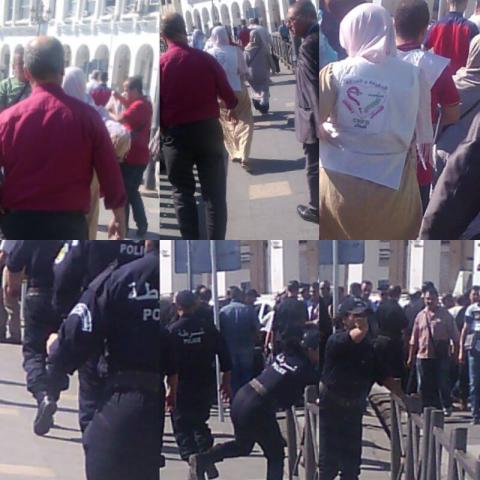 On 29 September 2016, 20 human rights defenders* and relatives of disappeared people were violently arrested by the police as they were peacefully demonstrating outside the National Assembly headquarters in Algiers. Alkarama sent an urgent appeal to the United Nations Working Group on Enforced or Involuntary Disappearances (WGEID) to call upon the State to respect its international obligations by ceasing to violate the rights of the families of the disappeared to peacefully demand justice and truth about the fate of their relatives.

Organised by the National Coordination of Disappeared Persons (CNFD) on the occasion of the 11th anniversary of the Charter for Peace and national Reconciliation, this peaceful demonstration aimed to denounce the amnesty granted by the Charter to the perpetrators of serious human rights violations committed during the civil war and to demand the right to truth and justice for the families of the missing. Human rights defenders and former political prisoners from the southern internment camps joined the families of the disappeared to support them.

Around 10:30am, when the demonstration was peacefully taking place, policemen from the Algiers Wilaya violently intervened, beating and dragging down the protesters, including elderly women, before taking them either to either the Diar Saada or the Mohammadia police stations. Before their release, most protesters demanded to be examined by doctors to establish their respective injuries. However, at the clinic where the protestors were eventually brought, some doctors demanded to examine the women naked or in shorts and, as the women resisted, refused to record the visible wounds on their faces and limbs.

This wave of arrests is part of a general context of intimidation and reprisals against human rights defenders and the families of the disappeared in Algeria. It should be recalled that the 2006 Charter for Peace and National Reconciliation prohibits any prosecution against the security forces who committed crimes during the civil war and criminalises any act aimed at "harming their reputation" or tarnishing "the image of Algeria internationally."

These provisions are systematically wielded by the Algerian authorities to justify their refusal to cooperate with the UN human rights mechanisms on the issue of enforced disappearances. The UN Human Rights Committee (HRC) and Committee against Torture (CAT) have repeatedly called upon the Algerian authorities to repeal the Charter's provisions which provide amnesty for perpetrators of serious violations which constitute crimes against humanity.

Alkarama therefore calls on the Algerian authorities to respect their international obligations by ceasing to violate the rights of families of the disappeared to assemble and demonstrate peacefully to demand justice and truth about the fate of their relatives.