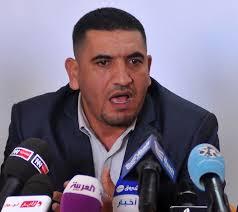 The Correctional Chamber of the Algiers Court sentenced today Mr. Karim Tabou, a leading figure of the peaceful protest movement born in the country on 22 February 2019, to one year's imprisonment.
Mr. Karim Tabou (42) is the spokesman of the Democratic and Social Union (DSU), a party he created in November 2012. From 2006 to 2011, Mr. Tabou served as First Secretary of the Socialist Forces Front (SFF), an Algerian opposition party founded in September 1963 by Hocine Aït Ahmed.
This morning, at the opening of his closed-door trial and in the absence of his lawyers, Mr. Karim Tabou felt a serious malaise, most likely due to a cardiac problem according to his family, and was urgently evacuated from the courtroom. Against all expectations, his trial nevertheless continued in his absence and in the absence of his defence, in a clear violation of all the rules of criminal procedure. Hence, he was sentenced to one year's imprisonment.
Mr. Karim Tabou had been sentenced at first instance on 18 March 2020, four days earlier, to one year's imprisonment, six months of which being without remission, and was therefore due to be released on Thursday 26 March. The General Prosecutor's office, however, set the date for the appeal trial for today, 24 March, without even informing his lawyers.
It should be noted that, according to the Algerian judicial practice, it is the first time in the country’s history that an appeal trial is fixed only 4 days after the pronouncement of the judgement in first instance. This haste of the General Prosecutor's Office, headed by Sid Ahmed Mourad, former Director of Criminal Affairs of the Ministry of Justice and recently appointed to this position reflects, according to the defence lawyers (Attorneys Badi Abdelghani, Zoubida Assoul and Bouchachi Mustapha), the willingness of the authorities to keep Mr. Tabouin prison and thus prevent him from being able to appear freely before the Court.
Mr. Karim Tabou was arrested on 11 September 2019 in front of his home by men wearing civilian clothes who presented themselves as belonging to the "security forces". They told his wife "that he will be back home within two hours" and did not show any arrest warrant or legal justification for his arrest.
Mr. Karim Tabou was charged with "undermining the morale of the army" and placed in pre-trial detention for defending the need to establish the rule of law in which the army should stick to its constitutional role, which is the primary demand of peaceful demonstrators throughout the country who are calling for the establishment of civilian rule in Algeria.
Today's condemnation of Mr. Karim Tabou, consequence of an expeditious trial and in violation of all the rules of national law and the principles of fair trial established by the International Covenant on Civil and Political Rights which Algeria has ratified, is a particularly serious precedent and reflects a desire for an escalation of the Algerian military authorities repression and their refusal to engage in a process of national dialogue involving all sections of society.
Alkarama has today submitted an urgent request to the United Nations Special Procedures to inform them of the details of Mr. Karim Tabou's situation, his particularly worrying state of health and his sentence pronounced after an unfair trial and in violation of the provisions of the International Covenant on Civil and Political Rights.