Djibouti: Arrest and Detention of Peaceful Protesters in Dikhil since 18 September 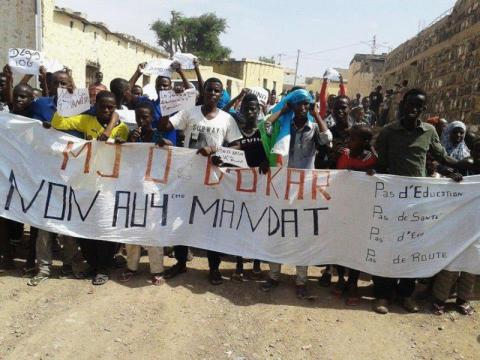 On 22 September 2015, Alkarama and the Djiboutian League for Human Rights (LDDH) sent an urgent appeal to the United Nations Special Rapporteur on the rights to freedom of peaceful assembly and of association (SR FPAA) regarding the arbitrary arrest of several people by the gendarmerie during repression launched on 18 September 2015, which affected many peaceful demonstrators and political opponents in the south-western city of Dikhil. Arrested in violation of their rights to freedom of expression and peaceful assembly, these people are at risk of going to prison for having publicly voiced their views, and in particular for their public opposition to the government.

On 18 September 2015, around 11am, the gendarmerie arrested seven men − Abdoulkarim Djama Guedi, Fatouma Mahdi Mahamoud (also known as Mahado Jano), Youssouf Ali Ismaël Kadir Ali Ismaël, Mahmoud Robleh Mireh, Hamze Reyeh Hassan, Frah Ali Ismael and Yahye Elmi Younis − all of whom are young supporters of the opposition coalition in Djibouti, the National Salvation Union (USN), and of the Youth Opposition Movement (MJO). The men were arrested for having participated in a peaceful demonstration in the streets of Dikhil in protest against the plan of a fourth term for current President Ismail Omar Guelleh. The same day, the authorities also arrested Ibrahim Hassan Abdi, an elected USN parliamentarian, and Said Ali Miguil, the head of the USN in Dikhil. Both Abdi and Miguil, had already been arbitrarily arrested and detained in July 2015. The USN's premises in Dikhil also underwent a search by the gendarmerie and various belongings and materials were seized.

Still on 18 September, and under the same circumstances, around 50 other peaceful demonstrators and opposition members, including children, were also arrested and taken to the police station in Dikhil, where some of them are still being detained under extraordinarily difficult circumstances, without access to lawyers and in violation of their fundamental rights, notably of Article 14 of the International Covenant on Civil and Political Rights (ICCPR), binding upon Dibouti by virtue of its ratification in 2002.

The above-mentioned persons are to be presented before the public prosecutor today, and run the risk of being charged with illegal demonstrations and brought before justice in retaliation for their political affiliations, which they had expressed in a peaceful manner.

Alkarama and the LDDH, through its president and lawyer Zakaria Abdillahi Ali, therefore urgently seized the UN Special Rapporteur on the rights to freedom of peaceful assembly and of association (SR FPAA), for him to call upon the Djibouti authorities to immediately release all those arrested and currently still arbitrarily detained. Alkarama and the LDDH also called on the authorities to end the ongoing harassment of political opponents in Djibouti and to ensure democratic and pluralistic dialogue in the country.