UAE: AFTER YEARS OF BEING PREVENTED FROM SEEING HIS FATHER, THE SON OF POLITICAL PRISONER ABD AL-SALAM DARWICH HAS DIED 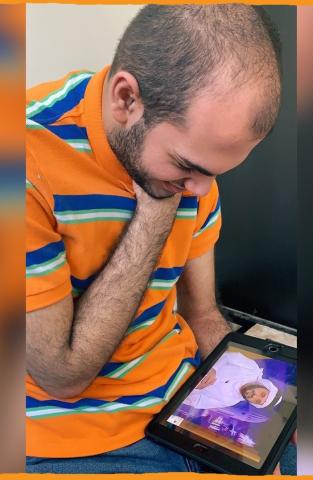 The family of UAE activist Abd al-Salam Darwish al-Marzouqi is in mourning after the death of his son Salman, whose health had deteriorated severely in the absence of his father, currently serving a ten-year sentence, nine of which were spent in Al Razeen prison. Abd al-Salam Darwish al-Marzouqi is detained following his conviction in the famous “UAE 94” trial in reprisal for having exercised his rights to freedom of expression and opinion. Alkarama had documented this political trial to the United Nations human rights mechanisms, which had in turn denounced its arbitrary nature.

Constant reprisals against Abd al-Salam Darwish and his family

In the case of Abd al-Salam Darwish al-Marzouqi, the Emirati authorities have gone beyond the arbitrary deprivation of liberty of the father, who was arrested nine years ago, subjected to enforced disappearance, torture and forced to sign confessions without being able to read them, thereby denying him his right to a fair trial. In fact, the authorities collectively punished his family by revoking his children's citizenship, denying them access to essential services such as medical care, something the activist's children particularly needed. As a result, Salman, who suffered from cerebral palsy from an early age, eventually died for lack of care, waiting in vain to see his father again after years of being deprived of any contact with him.

According to Emirati human rights defenders, Mrs Awatef, the wife of prisoner of conscience Abd al-Salam Darwich, had repeatedly called on the authorities to end their mistreatment and harassment of her family, which has caused them years of suffering. She also expressed her sadness at the mistreatment she and her children have suffered since her husband's arrest in July 2012. These numerous violations against the Darwish family include the withholding of all income from their father, a former government employee, the denial of the scholarships his children should have been entitled to, the obstruction of all legal proceedings the family was pursuing to claim their rights, as well as the routine threats of imprisonment for " cybercrimes " for reporting all these violations on social networks.

For over a decade, Alkarama has documented the situation of prisoners of conscience, from reformist opponents to human rights defenders, illegally detained in the United Arab Emirates. Urgent appeals and complaints to UN mechanisms on individual cases resulted in a resolution by the UN Working Group on Arbitrary Detention (WGAD) in March 2014, confirming the illegality of the imprisonment of the “UAE 94” group of reformists and peaceful activists, urging the Emirati government to release them.

Alkarama had then reported these violations to the UN human rights mechanisms from the beginning of the UAE's crackdown on human rights defenders and political activists, to the verdicts against the "UAE 94" reformers in July 2013, and again to this day. On 19 August 2013, Alkarama requested the WGAD to issue a decision regarding the 61 detainees in the 94 reformers' case, who were sentenced to prison terms ranging from 7 to 10 years.

This request had resulted in “Opinion No. 60/2013”, in which the WGAD concluded that the deprivation of liberty against the 61 individuals, including Abd al-Salam Darwich, in the “UAE 94” case was arbitrary, finding that “that the Government has a duty to release the detainees and that they should not have been convicted of the charges brought against them, or on the basis of their acts in the exercise of their right to freedom of opinion and expression”. This was the third decision adopted by the WGAD since 2009 regarding alleged violations of freedom of expression, fair trial and the prohibition of arbitrary arrest in the UAE, which the independent expert group described as recurring violations.

As part of this UN procedure, the WGAD had requested clarification from the UAE on 9 September 2013 regarding these allegations, but the government had refused to comply with the UN's requests within the specified 60-day deadline. As a result, the Working Group had subsequently issued its decision regarding the arrest of 61 individuals in the above-mentioned case.

In its decision, the UN expert group reaffirmed that peaceful criticism of one's country and its leaders cannot be considered an attempt to overthrow the government. The Working Group also concluded in its decision that the arrest and prosecution of the 61 individuals in the "UAE 94" case had " resulted from the exercise of their rights to freedom of opinion and expression and to freedom of peaceful assembly and association, guaranteed under articles 19 and 20 of the Universal Declaration of Human Rights”. The experts added that the “restrictions on those rights in the present case cannot be considered to be proportionate and justified”.

The WGAD also noted that the government had failed to take the opportunity to respond to serious allegations of torture, that the charges against the defendants were particularly “broad and vague” and that the judgments were not even subject to appeal. The WGAD thus concluded that the UAE authorities had violated the “right to a fair trial guaranteed in Article 10 of the Universal Declaration of Human Rights”, in addition to violating the rights to freedom of opinion and expression.

Finally, and in the same context, Alkarama and other organisations had sent an open letter to the authorities of the United Kingdom and the United States of America – as allies of the UAE claiming their interest in the human rights situation in Arab countries – urging them to intervene with the UAE authorities regarding the unprecedented repression against Emirati activists. However, the letter remained unanswered.