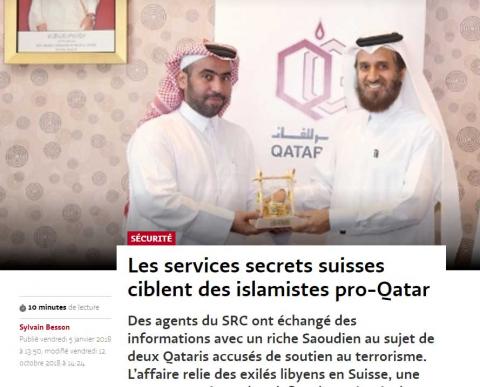 The Swiss daily newspaper Le Temps published on 6-7 January 2018 an article penned by Sylvain Besson suggesting that the Alkarama Foundation is investigated by the Swiss intelligence services because of suspicious relations.

The management of our Foundation had exchanged in good faith with the author of the article while he was conducting his investigations and answered his questions, making it clear that no links exist between Alkarama and several individuals and entities mentioned in his article.

When the article was published, the Alkarama Foundation immediately wrote to the newspaper requesting the publication of the following right of reply:

"In an article entitled "The Swiss secret services target pro-Qatar Islamists ", published online on 5 January 5 2018 (https://www.letemps.ch/suisse/2018/01/05/services-secrets-suisses- target-islamistes-proqatar) and on the printed version of the newspaper Le Temps, dated 6-7 January 2018, Mr. Sylvain Besson explicitly mentions our institution, the Alkarama Foundation. We consider that the article insinuates erroneous facts, thus undermining the personality of our Foundation. We therefore wish to clarify the following:

• Thus, the graphic titled "The galaxy that interests the SRC" conveys a false association of the Alkarama Foundation with the entities referred to in this chart since it suggests, wrongly in the light of what precedes, that these links are recognized as such by the SRC. Contrary to what comes out of the graph, the Alkarama Foundation therefore asserts that it has no connection with Qatar's Eid Al-Thani Foundation, the Swiss Central Islamic Council, or the Al-Nosra Front in Syria ;

• The article is based on the fact that Mr. Abdulrahman al-Nuaimi, co-founder of the Alkarama Foundation, was designated in 2013 as a supporter of terrorism by the US Department of Treasury (DoT). We wish to make it clear that these charges were brought against Mr. Al-Nuaimi's own person, and not against the Foundation. In addition, Mr. al-Nuaimi denies the charges against him. Finally, the US DoT, contacted by Alkarama, confirmed in writing that the Foundation was in no way concerned by the charges against Mr. al-Nuaimi ;

• The article states that "Qatar has encouraged [...] Alkarama to campaign against the intervention of the UAE in the war in Yemen". Alkarama is a Swiss Foundation under the control of the Foundations Supervisory Authority of the Federal Department of the Interior and which, in accordance with its charter, does not accept or receive any funding from an Arab government, including
Qatar. Since 2004, Alkarama has represented thousands of victims of torture, arbitrary detention, enforced disappearance or extrajudicial execution in the Arab world before the United Nations human rights protection mechanisms. As such, Alkarama does not act on behalf of any state but defends all victims of violations in the Arab world."

The request for publication of the right of reply was rejected by Le Temps and Alkarama had to file a complaint against the newspaper.

In addition, the Court ordered Le Temps to pay the Alkarama Foundation the sum of CHF 665 as reimbursement of the advance of legal costs and the sum of CHF 1,200 as other associated costs.

The Alkarama Foundation regrets that a serious newspaper like Le Temps publishes an article containing far-fetched and defamatory theses carried by authoritarian regimes in the Arab world, and welcomes the condemnation of the daily Le Temps by the Geneva court.