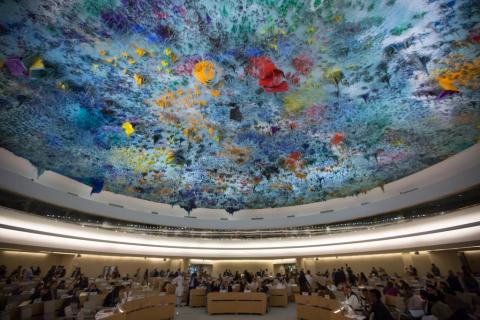 On May 17, 2019, the United Nations Working Group on the Universal Periodic Review (UPR) adopted a draft report following the review of Qatar’s human rights record on May 15, 2019. The report contains 269 recommendations made by United Nations Member States to Qatar, related to a flawed counterterrorism framework, the situation of migrant workers, women’s rights, and restrictions to the rights to freedom of expression and freedom of peaceful assembly.

During the UPR, a number of countries, including Iceland and Czechia, called on Qatar to bring its counterterrorism law and Penal Code in conformity with international standards. In particular, concerns were raised over the vague definition of terrorism, the practice of secret detention, torture, and the prolonged duration of pre-trial detention.

Restrictions to the rights to freedom of expression, peaceful assembly and association

For instance, in 2014, Qatar introduced its cybercrime law, which constitutes a serious threat to freedom of expression online as it is vaguely worded and allows for the authorities to vaguely interpret some of its provisions. According to the law, the authorities can ban any website considered to be threating the safety of the country. Moreover, sharing any content that undermines Qatar’s “social values” can be punished with up to three years in prison and a fine up to 500,000 Qatari Riyals (about 137,000 USD). A number of states, including France, Sweden, Czechia, and Austria, called on the government to ensure that this legislation does not constitute an additional threat to freedom of expression in the country.

The situation of migrant workers

Migrant workers in Qatar continue to live under the Kafalah system (sponsorship), putting them at the mercy of their employers. Although Qatar has stated that its national legislation is guaranteeing protection for the rights of migrant workers including the right to freedom of movement and decent living conditions, migrant workers continue to be deprived of their rights. During the UPR, UN Member States have formulated recommendations for further amendments to the labour law. This include providing migrant workers with fair wages, limited working hours, proper health insurance, and other rights. States including France and Spain also called for a full abolition of the sponsorship system. Moreover, dozens of countries called on Qatar to ratify the Convention on the Protection of the Rights of All Migrant Workers and Members of Their Families.

Women continue to face discrimination in Qatar: among others, women cannot pass on their nationality to their children. In addition, states such as Germany, Moldova, Slovenia, Belgium, Iceland and Brazil called on Qatar to take all needed measures to combat domestic violence and criminalise it.

Moreover, Qatar has introduced reservations to articles 2.1, 9.2, 15.1, 15.4, 16.1 (a, c, f) of the Convention on the Elimination of All Forms of Discrimination Against Women (CEDAW). Reservations include passing citizenship to children, equality before the law, freedom of movement, and the rights to have same parental rights and to decide to enter into marriage. Thus, many states including Romania, Moldava and Russia, called on Qatar to left its reservations on the CEDAW.

Overall, Qatar received 269 recommendations from 104 UN Member States, which it must consider before September 2019, and inform the Human Rights Council of whether it will accept or reject the recommendations. The state should then implement the accepted recommendations before its third UPR cycle in 2024 in order to improve the human rights situation on the ground. Alkarama will continue to closely follow the situation in Qatar and call on the authorities to act in line with international human rights law.