Palestine: New Case of Punitive Demolition and Land Grabbing − Israeli Authorities Must Stop this Practice and Provide Remedy to Victims 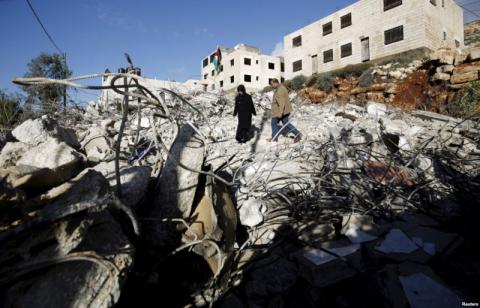 In the middle of the night on 8 January 2016, the Israeli Defence Forces (IDF) destroyed Shafeeq Halabi's house in Surda, a village north of Ramallah, in reprisal against Halabi's son Muhannad shot dead by the police three months earlier for stabbing Israelis. Concerned over the continued use of house demolitions as a punitive measure − in this case the demolition was carried out merely to punish Muhannad's relatives who had nothing to do with the attack − Alkarama sent on 12 February 2016 a communication to the United Nations Special Rapporteur on adequate housing (SR Housing), Ms Leilani Farha, requesting her to call upon the Israeli authorities to provide the Halabi family with an effective remedy for this blatant violation of their rights.

The IDF started to demolish the two-storey house where the 52-year-old plumber lived with his wife and four children at 11pm on 8 January 2016, and finished five hours later at 4am the following day. The land where the house was built was then seized by the IDF and Halabi's family and the inhabitants of Surda prevented from accessing the area. Shortly after the demolition, clashes broke out between youths and the IDF, leaving some Palestinians injured.

Similar episodes of punitive house demolitions are in surge in the Occupied Palestinian Territories (OPTs) since its reintroduction in the summer of 2014 after an almost 10-year moratorium, with more than 900 houses having been demolished between 2006 and 2015 in the West Bank only according to B'tselem, the Israeli Information Center for Human Rights in the OPTs. In 2005, an Israeli military commission found that house demolitions had "a questionable deterrent effect".

Such demolitions however totally disregard the right to adequate housing enshrined in the 1966 International Covenant on Economic, Social and Cultural Rights (ICESCR) to which Israel is a party. They are also considered a discriminatory practice against Palestinians, and have been deemed as a form of cruel, inhuman or degrading treatment if not torture, by the UN Committee against Torture (CAT) in its last Concluding Observations on Israel.

"Unlawful house demolitions punish innocent people not responsible of any wrongdoing. This practice of collective punishment does not only violate international human rights law, but also international humanitarian law, and could be considered as a war crime," explains Rachid Mesli, Legal Director at Alkarama.

Alkarama therefore calls on the Israeli authorities to "immediately put an end to conducting punitive demolitions given their incompatibility with the State party's obligations under the Covenant and provide effective remedies to victims of destruction of property, forced eviction and forcible transfer," as recommended by the UN Human Rights Committee (HRCTee) in its Concluding Observations issued during its most recent review of Israel in October 2014.