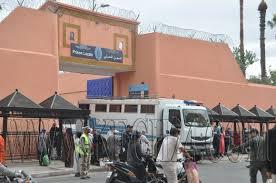 Al Karama was informed of the arrest on 13 April 2008, in Marrakesh, of Mr. Asfari, Sahrawi human rights defender, by plainclothes police officers. Mr. Ennaama ASFARI 38-year-old Saharawi human rights defender and co-chair of CORELSO (Committee for the respect of freedoms and human rights in Western Sahara) lives in France. He had visited Morocco on 25 January 2008 for family reasons.
The group of five plain clothes police officers who arrested Mr. Asfari on 13 April 13 at 21h30 were travelling in a grey Renault Clio car which followed him since the day before. He himself was in his car at the time of arrest. He was beaten before being thrown into the police vehicle. The officers blindfolded him and took him to an unknown destination.

Later, Mr. Asfari found himself in a place he does not know, the eyes still blindfolded, handcuffed, stripped, tied to a tree. He was again beaten and with such brutality that he lost consciousness and had to be transported to a hospital.

On 14 April 2008, in the early morning, Mr. Asfari was taken to the police station which is located in the place of Jamaa Elafna and underwent an interrogation about his relations with the Sahrawi students and his activities. He was detained in that station until his presentation to the Attorney General of Marrakesh on 15 April 2008 at 10 am. The latter has decided to make Mr. Asfari appear before the court on the same day. The reasons for the arrests had not yet been notified to him.

Around 17 pm, Mr. Asfari has been presented before the court, which decided to postpone the hearing until 17 April 2008, to enable him to mandate a lawyer. The audience of 17 April was also postponed to 21 April 2008.

Mr. Asfari is incarcerated at the Boulemharez prison in Marrakesh since Tuesday, 15 April 2008. His family was not informed of his arrest and was unaware of his place of detention. He was located only after three days of disappearance. He had asked for permission to contact his wife, but was not permitted to do so. Thanks to the mobile phone of a fellow prisoner he was able to inform his wife about the place of this detention. He reported that he is being held in a room of 30 m2 with 50 other people. He was beaten for two days, and injuries to his face and one of his feet had not yet been treated.

Since his arrival in Morocco, he was under surveillance. Despite the fact that he had informed nobody about his trip to Morocco, he was arrested while boading off the airplane. Those who questioned him were aware of his activities in France and that were not in the public domain. It is therefore very likely that there has been a cooperation and exchange of information between French and Moroccan services about him.

In February, a representative of the Moroccan security in the Western Sahara had contacted Mr. Asfari to warn him that if he went to El Ayun or Smara, he would risk 3 to 4 years in prison. A few weeks later, he went to Rabat to attend the trial of a Sahrawi student, Said Bellal, who was sentenced to four months in prison. The police waited at the train station in Rabat and embarked him into a car where he was interrogated at length. The police had prohibited him to attend the trial. Mr. Asfari asked to be able to go to see his cousins, but was forbidden to do so. However, he was escorted by police to Marrakech.

Mr. Asfari had already been arrested in Smara, on 5 January 2007 and detained in the local prison before being released on bail on 11 January 2007. Presented to the court on 15 January 2007, he was sentenced to two months in prison. The sentence was upheld on appeal on 21 May 2007.

Morocco has officially pledged during its Universal Periodic Review, which took place on 8 April 2008 to cooperate with the special procedures of the United Nations.

The arrest of Mr. Asfari is certainly related to his activities as a defender of human rights and we recall that the resolution of the UN General Assembly 53/144 of 9 December 1998 gives special protection to defenders of human rights.
Morocco
Torture
Arbitrary Detention
Human Rights Defenders