LEBANON: RELEASE OF A DETAINEE AFTER AL-KARAMA FILES AN APPEAL WITH THE UN PROCEDURES AND AFTER THE DEATH OF ANOTHER DETAINEE IN ROUMIEH PRISON 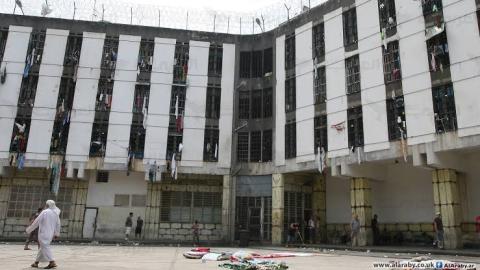 Danish citizen of Lebanese origin Arabi Ali Muhammad Ibrahim was released after 11 days of arbitrary and illegal detention. On 29 October 2021, Alkarama sent an urgent appeal to the UN Working Group on Enforced Disappearances. Lebanese security forces had abducted Mr Arabi Ali Muhammad Ibrahim on 20 October 2021 in the Al-Mankoubin neighbourhood of Tripoli, Lebanon. As he passed by in Al-Nour Street, he was approached by security forces in several cars, beaten and forced into one of their vehicles, before being taken to an unknown location, in full view of passers-by and neighbours.

Alkarama strongly condemns the continuing violations of the right to liberty and physical and moral integrity by the Lebanese authorities through arbitrary detentions, enforced disappearances and torture.

Enforced disappearance as a form of retaliation

The victim is the son of the former detainee, Ali Muhammad Ibrahim, a Danish national of Lebanese origin, who was arrested in Tripoli on 24 May 2007 before being held incommunicado and tortured. He was then transferred to Roumieh prison, where he remained in solitary confinement for 5 months before being transferred on 27 October 2008 to the "B" wing of the same prison.

Alkarama expresses its concern at the persistence of the practice of torture that still prevails in the country, due to the authorities' failure to comply with the recommendations of the Committee against Torture in this regard, and to the total impunity of those responsible for crimes of torture.

Furthermore, it seems that the arrest of Arabi Ali Muhammad Ibrahim is a form of retaliation against his father for his peaceful activism in Denmark, against the impunity of members of the security forces responsible for his arrest and the torture he suffered in his native Lebanon.

On 15 October 2008, Alkarama submitted an individual complaint to the UN Special Rapporteur on Torture regarding Mr Ali Muhammad Ibrahim, as well as 12 other victims of torture in Lebanon, who were arrested in the context of the tragic events that took place between May and September 2007 in the Palestinian refugee camp of Nahr-al-Bared, in northern Lebanon.

Death of prisoners due to intentional negligence

In the same context, Alkarama recently learned of the death in prison of the young Palestinian, Yasser Al-Hassan, who died in his cell in Roumieh prison because of medical negligence leading to a heart attack, which finally led to his death after 15 years of detention and ill-treatment. Al-Hassan was arrested in the context of the events at Nahr al-Bared camp, which had seen widespread human rights violations, including arbitrary arrests and arbitrary sentences handed down in unfair trials.

Alkarama had informed the UN protection mechanisms of the situation of the detainees and their conditions of detention, pointing out that under a 2007 Ministerial Council decision these detainees were to be tried by the "Justice Council". The latter, as a special court, failed to guarantee a fair trial and offered no recourse, as its decisions are final and cannot be appealed.

During the review of the human rights situation in Lebanon by the UN independent experts in November 2010, it was pointed out that the prosecution by the Judicial Council "contradicts the principle of separation of powers, independence of the judiciary and equality before the law". In addition, the detainees had all claimed to have been tortured, either at the Ministry of Defence headquarters or after their transfer to the military court, to extract admissions of their membership to the Fatah al-Islam group to be used against them in their trial. Nevertheless, the judiciary has not ordered any investigation into these serious allegations.

Torture: a prevalent practice in Lebanon

It should be noted that all persons arrested in the context of or in relation to the events at Nahr al-Bared camp were subjected to torture and/or ill-treatment, including those who were detained for short periods. Moreover, most of the arrests were made without a court order, and without informing the persons concerned of the reasons for their arrest, as most of them were carried out by members of the military intelligence services in civilian clothes.

According to their testimonies, victims were held incommunicado for varying lengths of time, ranging from a few days to several months, notably at the Ministry of Defence headquarters. They reported being subjected to torture following a certain pattern: all the detainees reported being insulted, abused, threatened and beaten, from the very first moments after their arrest.

The main purpose of these serious and severe acts of physical and psychological torture was to extract confessions and force the victims to sign reports that were prepared by their abusers and which they were not even allowed to see. All the detainees stated at their first appearance before the investigating judge that they had been tortured and ill-treated during their secret detention, but at no time did the judge take their statements into consideration or order an investigation into their allegations.

Yet the victims' statements were reliable, especially since they all bore visible traces of torture on certain parts of their bodies and, in some cases, on their faces. Consequently, it would have been impossible for the judges to ignore the use of torture, which instead appears to have been endorsed by the wider judiciary.